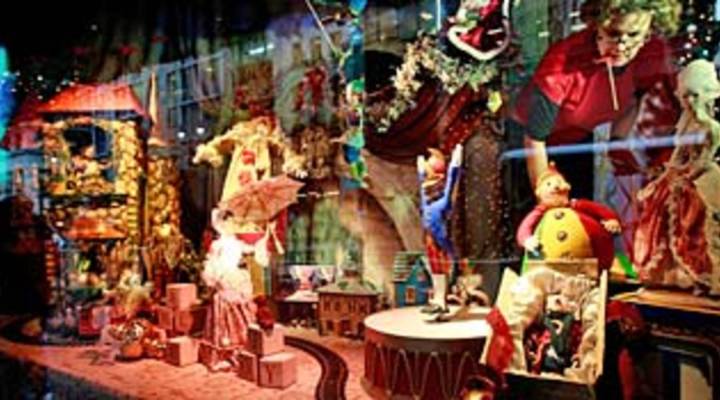 This season is no holiday for retailers

This season is no holiday for retailers

SCOTT JAGOW: It appears a lot of people have quit their spending habit for now. In October, retail sales had their biggest drop on record. We all know the stores are gonna suffer this holiday season. But how bad can it possibly be?

Here to help us figure it out is our own retail maven, Stacey Vanek-Smith. Stacey, what’s the forecast?

STACEY VANEK-SMITH: It’s going to be terrible. Just to give you an example: Last year consumers spent about $460 billion during the holiday shopping season. This year that’s expected to go down by about 1 percent. Now, that doesn’t sound that bad, but that number never goes down. In fact, the last time it went down was the early ’90s. And the last time it’s gone down that much was the early ’80s.

JAGOW: Wow. Now, what are retailers doing to respond to this to try to get anyone to come and shop?

VANEK-SMITH: Sales. They’re launching huge sales. I mean, everyone from Nordstrom’s to Macy’s to Ann Taylor, we’re seeing 30 percent off, 40 percent off. These are sales that we usually don’t see until after Christmas. And that’s really bad because retailers count on profits that they make during the holidays for the whole year. Often, 80 percent of their profits for the whole year come from this time of year.

JAGOW: I keep hearing, “Well, Wal-Mart’s doing OK. Everybody’s stinking up the joint, except Wal-Mart.” Is that really true?

VANEK-SMITH: It is, actually. The only people that are really sort of doing OK in this downturn are super-deep discounters that are offering sales on top of their discounts. But even they are not necessarily doing as well as they should be. I spoke with Burt Flickinger — he’s a retail analyst — and he said even the sales at the big discounters aren’t as high as they should be right now.

BURT FLICKINGER: There aren’t any clear winners. And the more people who report, the worse it’s going to get. And the consumer’s more cash and credit constrained than ever before.

So, even the Wal-Marts of the world are getting crunched.

JAGOW: Stacey, I was watching TV the other day and I noticed that the ads that have come out so far for holiday sales seem very, kind of, gooey. Trying to get that Christmas spirit evoked in people. What else, besides dropping the price, are retailers doing?

VANEK-SMITH: A couple of things. Price drops are obviously the big one because people just can’t spend on credit this year. So a lot of stores are really promoting programs like lay-away, where you can spend money but don’t necessarily have to count on your credit card. A lot of huge, sort of personalized promotions to loyal shoppers. People are getting a lot of discount cards or special sales events. Basically, anything to sort of get people into the store. And they figure once they’re in the store they’ll buy things.

JAGOW: And what kind of effect will this have on the economy as a whole?

VANEK-SMITH: Well, the real trickle-down effect that we’re going to see is the job market. About 10 percent of Americans are actually employed in the retail sector. And actually a quarter of the layoffs that we’ve seen since last November have been in retail. That’s more than even the automotive sector. So, it’s really been hit. And the real problem with that is, is that retail jobs are sort of a go-to place for workers without college educations. They’re considered the most vulnerable during economic downturns. And so it’s really bad news when those jobs start drying up, because that’s really be a place for people who’ve lost jobs in manufacturing, younger workers, people with fewer skills, they’ve all gone to the retail sector traditionally.

JAGOW: I think it’s going to be an old-fashioned Christmas.

VANEK-SMITH: Yes, yes, the kind with no gifts.