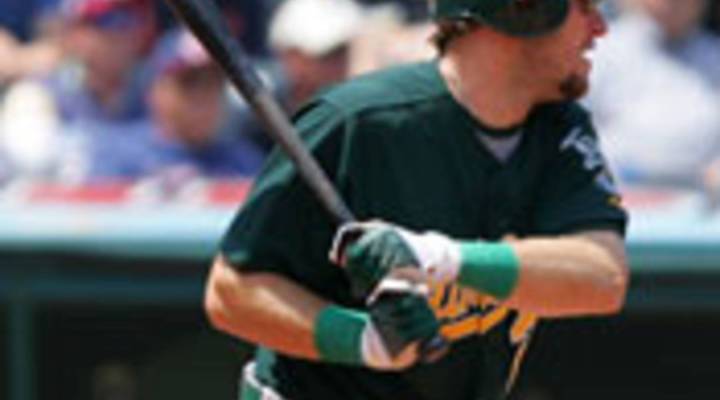 Kai Ryssdal: So, who do you like in the first game of the World Series tonight? The Tampa Bay Rays, baseball’s Cinderella team? The worst record in all of baseball last year, now playing for all the marbles.

Or are you, for some reason, a Philadelphia Phillies fan? They’ve been to the series before, but not in a long time and they haven’t won it in almost 30 years.

There’s all the usual inside baseball talk about pitching match-ups and batting averages and on-base percentages and how all that’s gonna change the game. But as Marketplace’s Nancy Farghalli reports, there may be another game-changer in the offing. Not for the Series this year. But coming some season soon with the crack of the bat.

Nancy Farghalli: It’s not the play Major League Baseball wants you to see.

Man: Here again, watch where the barrel of this bat goes.

That thick part of the bat flew over the pitcher’s mound. The Red Sox pitcher John Lester ducked out of the way.

Man: Oftentimes, you watch the ball, you don’t see the bat coming.

Those shattered bats are usually made from maple wood. Roughly 60 percent of players use maple bats. University of Chicago Professor Allan Sanderson says a maple bat isn’t as heavy as bats made of ash.

Allan Sanderson: Lighter bat weight means greater bat speed and so that increases the velocity of a batted ball or gives the batter a fraction of a second to decide whether to swing or not. You know, if you can hit 10 points higher on your batting average that may mean $1 million to you.

But maple bats carry risks like exploding into sharp pieces. Major League Baseball has collected more than 1,700 broken bats from July to September. This season, a chunk of maple hit a coach in the face. Another fragment shattered a fan’s jaw.

[sounds from a ball park] At a recent Dodgers game, Judy Ann Regan watched batting practice from her field-level seats. She’s seen bats snap into pieces. But she’s not in favor of one suggestion being batted around — extending a net around the first level of seats.

Judy Ann Regan: I come to a ballpark to get that outdoor feeling and see like your part of the field. You don’t want to look at a net like you are in prison.

More than 30 companies are licensed to produce maple bats for the major leagues. But there isn’t a uniform standard for wood quality. So companies can compete by selling cheaper bats. And that means using cheaper wood. Major League Baseball formed a safety and health committee to study the manufacturing of maple bats.

Chuck Schupp: [mechanical wood-turning sounds] It turns a pro bat in about 15 seconds. It is totally computerized and is 100 percent accurate on all the specs of the bat.

Chuck Schupp stands in the factory of Louisville Slugger. It supplies 80,000 bats a year to Major League players. About half the bats are maple.

Schupp: When you see a maple bat break, usually it is the one that does go in several pieces, and that is an issue, there’s no doubt. That does not necessarily mean it is a bad piece of wood, that’s just the way maple fails.

Schupp: The bat integrity starts with that piece of wood. But I think they are looking at the right aspects of it. And I think at some point they might come up with some standards on how you process the wood, those type of things that probably have never been looked at in the past.

But tonight, fans will be more focused on how the players use their bats.