All tax plans are wealth redistribution

All tax plans are wealth redistribution

Renita Jablonski: Joe Wurzelbacher, aka “Joe the Plumber,” has become something of a celebrity. It’s all thanks to his opposition to Barack Obama’s plan to increase taxes for people making more than a quarter-million a year. Wurzelbacher in particular slammed Obama for wanting to quote “spread the wealth around.” Joe and John McCain have called that socialism. But commentator Will Wilkinson says all tax plans, even McCain’s, are by nature wealth redistribution.

Will Wilkinson: If you ask Joe, the money Joe’s earned is Joe’s money, and it should be up to Joe, not the government, how to spend it.

Well, I’m on your side Joe. Sort of. I dream of a government limited to a few essential functions with a minimum of redistribution. Sadly, no major candidate is offering that.

In the system we have, as opposed to the one you and I might want, democracy just is one big machine for spreading the wealth around. The real question is how much of whose money is taken, and who gets it. Politics gets nasty because everyone wants to control the business end of the tax-and-spend stick.

Joe, Did you, like John McCain but unlike Barack Obama, support the invasion and occupation of Iraq? Well, that’s cost taxpayers over a trillion dollars so far, and has, like it or not, spread a whole lot of wealth to defense contractors.

What do you think of McCain’s proposed $5,000 family health care tax credit? It might be a great idea, but it’s not a way of not spreading wealth. The wealthiest 5 percent pay almost 60 percent of all federal income taxes. They’ll be footing most of that bill, too. And if you’re sniffing around for socialism, why not try Gov. Sarah Palin’s Alaska, where every year the state pays residents equal shares of state-owned oil revenues?

The one thing McCain and Obama seem enthusiastically to agree on, “energy independence,” would spread wealth from consumers and taxpayers to politically favored energy firms. The big difference is which companies gets the subsidies.

Joe, if you’re listening, I feel your pain. Because it’s worse than you think. There’s no way out. My guess is that under McCain’s slightly more pro-growth economic policies, there may be a bit more wealth to spread, and the weapons manufacturers will be secure in their meaty share. Under Obama’s policies, the ethanol racket is safe, labor unions may see their fortunes rise, and even you get that middle-class tax cut.

If you can plumb the depths of that choice, Joe, give me a call.

Jablonski: Will Wilkinson is a research fellow at the Cato Institute. 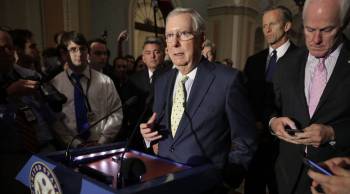 Weekly Wrap: Is it a health care bill or a redistribution of wealth?