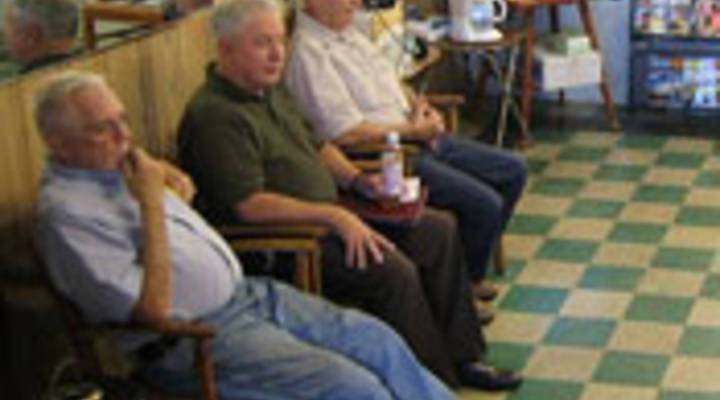 Who can you trust?

COPY
Inside Rich McCarty's barbershop in Jefferson City, Mo. Tess Vigeland
Who can you trust?

Kai Ryssdal: Tess, you know we’re focusing on the issue of trust this week. Can we trust our banks, Wall Street, even really, the government? You just came back from ten days out on the road Tess, talking with people all over the country. What did you find when it came to this very important question of trust?

Vigeland: Very, very interesting. Kai, you know that saying on Wall Street about taking a haircut?

Ryssdal: Yeah. Basically, if you have investments, you’ve probably taken one — that is to say a loss, and usually a big one.

Vigeland: Right, well last week I visited with some folks who are taking haircuts on Wall Street and on the corner of Franklin and Madison streets in Jefferson City, Missouri.

Vigeland: Trust comes into play the moment anyone takes a seat in one of Rich McCarty’s barbershop chairs.

That’s one close shave for Bob Snyder, an IT consultant in Jefferson City. He’s been getting a military style buzz from McCarty since 1994.

Snyder: He’s always a good source of information because as he was telling you earlier, everybody comes in here: investors, bankers, lawyers.

They come for the cuts, and also for a little stock talk, from McCarty and from CNBC, which squawks from a nearby television as he wields his razor.

McCarty is 61. He started barbering in “Jeff City,” as he calls it, in 1965. He’s also a longtime investor who’s seen this kind of turmoil before.

McCarty: Last year, I had 28 stocks as of October. I am down to 2 stocks right now and I just bought them in January. The markets are going to come back. They always do.

He says his broker thought he was crazy when he sold off most of his stocks at the start of the year. “I remembered what happened in March of 2000,” he says, “that dot-com bust, so I sold.” Right now he’s just breaking even and he’s trusting that the market meltdown will eventually work itself out.

Neither does customer Bob Schepker. He’s 71, been coming here for oh, 20 years at least, he says, and he’s watching as the markets lurch from one piece of bad news to another.

Bob Schepker: It bothers me but it don’t really scare me because I think, you know, we need to just ride it out. It’s all I know how to do. People sell out now, they’re gonna lose their money too, so I guess it’s a risk one way or another.

Vigeland: Are you retired at this point?

Vigeland: Do you have any money in stocks right now? Or have you moved everything to safety??

Schepker: No, I’ve got money in stocks.

He’s also got a state pension and social security to live on while he rides it out.

Bob Snyder’s still in the barber chair. He says the investment club has lost almost 20 percent off the value of its holdings.

Snyder: But we expect that to go back up. And we look, we try to look for stock that’s going to grow 15 percent a year.

Yes, haircuts went up a dollar to 11 bucks this year. Inflation has come to Rich McCarty’s barbershop. And by the way, he says he’s much more concerned about that than what’s happening on Wall Street. And he’s annoyed that the Fed lowered interest rates to help out banks even with inflation on the rise.

McCarty: The law of supply and demand takes care of everything. If they just stay out of it, it will take care of it, but we try to manipulate everything.

Meanwhile, 74-year-old Bob Semb — yes, there were three Bobs in the barbershop — he sat quietly observing Bob Snyder’s haircut. Semb is a retired accountant who now advises investment clubs and he too says he’s seen all this before and he trusts that there will be yet another rebound — eventually.

Bob Semb: The value of my portfolio has gone down, of course. But, if I don’t sell anything, then I don’t lose anything. It’ll be back.

In fact he’s so convinced of that, aside from social security and his pension, he has 99 percent of his nest egg still in stocks. I asked if he thought everyone should just chill like him.

Semb: I mean, everybody’s got a different mentality, they look at it differently. Some people are not going to be able to withstand what’s going on and they’re gonna sell and some folks are gonna sit around all day and just watch it go up and down.

Vigeland: And you don’t lose sleep at night?

Semb: Not a bit. Cat might keep me up, but not the stock market.

“Cat might keep me up, but not the stock market.” That’s trust.

Who can you trust?
Tags in this Story
Share this Story