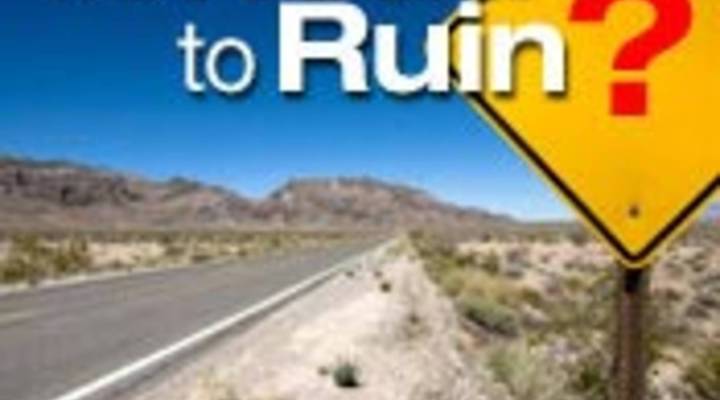 At the end of the road to ruin

At the end of the road to ruin

Scott Jagow: The regular host of this show, Tess Vigeland, is out on the Great American Highway. Tess and Marketplace’s Amy Scott have been traveling from town to town, trying to get some of the real stories of this financial crisis.

Tess started on the West Coast, Amy on the East Coast, and they meet us in St. Louis — where else?

We’ve called this series, “Road to Ruin?” with a big, fat question mark. We’re asking with what’s happened do people believe, as a country, we’re heading for financial ruin or will we bounce back with vigor?

Tess, let’s start with you. What kinds of things are you hearing?

Tess Vigeland: I don’t know about you Amy, but I was very surprised at the lack of panic. People are very concerned, but for the most part, you get out here on the road and I just didn’t get that sense. And in fact I asked several people along the way, you know, what do you think about this kind of sense of panic in the markets and one couple that I talked to in Reno — Wes Elliott and his wife Marge, they live there — he’s in real estate, it’s been really slow the last year or so, but for the most part they both agree that they either don’t believe the predictions of doom and gloom or they’re really just not seeing it yet in their daily lives. Here’s Marge:

Marge Elliott: You know, it’s really hard when you live your everyday life and it’s the same as it was yesterday. But you know what? If it comes, I think we’re ready to crack down and do it — drive less, go out to eat less, whatever it takes.

Vigeland: And those were some of the practical things that folks talked about. I don’t know Amy, did you get any sense of doom and gloom on your trip?

Amy Scott: Well, I did, but I think it’s because I was going through some pretty different territory. For one thing, I started in Charlotte, where one of the largest employers, Wachovia, its fate was really up in the air. In Pittsburgh last weekend I met a woman named Janice Demblowski. She’s 60 years old and had hoped to retire soon, but not anymore.

Janice Demblowski: If my health and my mind continue, I’ll try to work until I’m 70, because there’s no way we can afford to retire now. My husband is very blessed, he has a pension, but that could go at any time depending upon where that pension was invested in.

Scott Jagow: What more did you find in terms of worrying about financial security in the long run?

Vigeland: I think, as we’ve been finding over the last several weeks, that a lot of it depends on how close you are to retirement. I visited with a wonderful family in Nebraska, the Landis-McKibbin family. They’ve been talking about the economy a lot and Melody Landis, who is the mother, had this to say about how their conversations have been going recently:

Melissa McKibbin:The answer was that we uniformly agreed that Mom and Dad were going to move to the farm and grow vegetables at some point…

Matt Landis:Well, my idea was to ship ’em someplace where the dollar’s better.

Vigeland: So that was, by the way, Melissa McKibbin, who is the daughter, and Matt Landis, who is the son; they’re both in their 30s. So obviously a little joking around there, but Mom and Dad really are worried about, at this point, when they’re going to be able to retire. They’re both in their early 60s. Matt also talked about, you know, he’s in the mid-30s, but he’s definitely paying a lot more attention to what’s going on in the economy than than he ever has and this is how he described it:

Landis: I’ve never seen this in my lifetime and it’s got me worried. You know, I’ve got some money in 401(k)s, I’ve been doing some investing and I don’t know how to handle these things.

Vigeland: So really, at least for this family, they’re very much looking to the future and trying to figure out how this is all going to play out. But Amy, I think you ran into folks who have much more immediate concerns.

Scott: I did, yeah. You know, I traveled through some pretty bleak places: Youngstown, Ohio, a depressed former steel town. Then I went to Michigan, which has been in a recession for years now with the auto industry contracting. I stopped by a place called the Bomber Restaurant in Ypsilanti, Michigan, where owner John Sebastian said it’s hard to imagine the economy getting even worse:

John Sebastian: I think we’ve been beat up as badly as any state in the United States. The auto always seemed to carry everything, but now it’s gone.

Jagow: As you were driving through these different states and meeting all these people, what kind of good things did you hear?

Vigeland: I heard a lot of good things actually. I dropped by a barber shop in Jefferson City, Missouri, just a couple of days ago and I spoke with 74-year-old Bob Sem who is living on his pension and some investment income and I said, “You know, how are you feeling about all this? Are you worried about your money?” and he said, “You know what, uh-uh.”

Bob Sem: We’ve been there before. It goes up and it goes down. I don’t really worry too much about the market itself.

Vigeland: So are you still invested?

Jagow: Alright, Tess Vigeland and Amy Scott from St. Louis, bringing us stories from Middle America. Thanks for sharing those stories and safe travels.

Scott: Happy to do it.

Jagow: And we’ll hear more from Tess in a moment.

Vigeland: Yeah Scott, we can’t be tardy because we’re about to head into econ class.