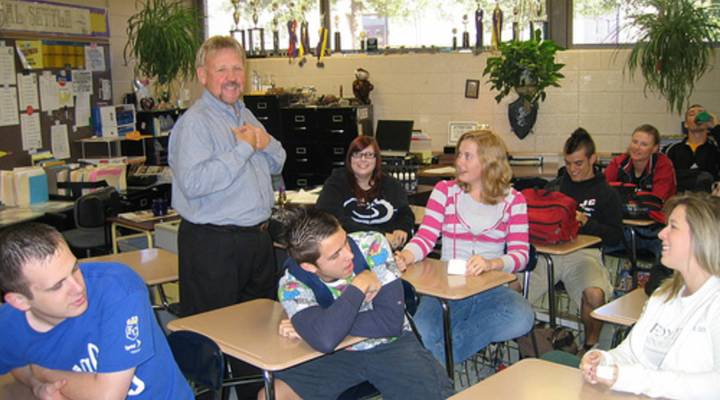 Econ class is now in session

Econ class is now in session

Scott Jagow: Tess Vigeland is still with us from St. Louis. She’s been driving an awful lot — all the way from the West Coast, stopping in towns along the way and talking to people of all ages.

This week, she went back to high school and sat in on a class about the economy.

Tess, what are high school kids saying about the financial crisis? Are they even paying attention to it?

Tess Vigeland: Yes, they certainly are, Scott. During this last leg of the road trip I decided to take a recess of sorts, spend some time in a classroom where they’re talking about economics. You know, it’s been a long time since I was in high school — longer than I care to acknowledge. I vaguely remember learning about interest rates and the banking system, but I certainly don’t remember sitting through the kind of real-life tutorial that they’re getting at Blue Springs High School, just outside of Independence, Missouri.

Ron Settle: OK guys and gals, we find our spots. We welcome Tess. She’s here. She’s making her way across the United States starting from San Francisco, seeing how people’s reactions are on the economy and is this your first high school?

Vigeland: It is. First and only.

Settle: First and only!

Right off the bat, Mr. Settle had them gather round a small desk at the front of the classroom to review the most recent results of their stock market game. At the start of the school year they were given $100,000 to invest — on paper, of course — with companies on the New York Stock Exchange. Over the semester, their returns will compete with other classes throughout the district.

Settle: I do have yesterday’s results from the stock market game. Who is team 30ZZ36? Hey, you’re in first place in the region and you have actually made money!

The only team to make money in a week that saw plummeting stock values. What’d they buy? General Electric and Potash, a Canadian fertilizer company.

After a brief a discussion of the previous night’s presidential debate, Mr. Settle turned to the day’s headlines.

Settle: Did anybody read about what the Federal Reserve is going to do? Powers that it hasn’t used since the Depression.

This was Wednesday morning, after yet another 500-point drop on the Dow. The Fed not only cut interest rates along with other central banks around the world, but it also promised to buy up unsecured debt from U.S. companies.

Settle: And I imagine there will be some that will challenge whether or not they have this right because it’s pushing the limits of what the Fed can do and in the paper it said up to $900 billion worth of loans. Good thing is that it can prop up the economy. Bad deal is is who will be on the hook if they can’t pay ’em back?

At that point, one student asked, “Wasn’t the bailout supposed to prop up the economy?” Yup, said Mr. Settle. “But we ended up paying for manicures and spa treatments,” cried another student. It was a reference to that morning’s news that AIG executives went on a half-million dollar retreat after receiving $85 billion from government coffers, something Mr. Settle hadn’t even read about yet.

Settle: If you were head of the Fed, what would you be doing right now if you were those guys?

Chris Gunn: First I would set out to reassure the American people.

Settle: How would you do that?

Gunn: I’d go on TV and say, “Hey, times are difficult but the fact that our market’s correcting is a good thing so it’s not artificially high. Second…

And this 17-year-old went on to laud the virtues of corporate tax cuts. Fellow student Risa Clements decided that wasn’t so high on her family’s list of concerns.

Settle: How many of you think that what’s going on in the market actually affects you?

Risa Clements: I think it affects me through my parents income because I am currently unemployed and they aren’t spending as much on me because they don’t have as much money and my dad is worried about losing his job. It’s just our overall way of living will probably change.

Student: Mr. Settle, do you think that gas prices going down has anything to do with the election or is that just something people say?

Settle: If either candidate could control that, I don’t think it would have been at $4.85 this summer. You’re gonna get people telling you everything and blaming everyone.

And by the way, Mr. Settle’s stock answer for any question that requires him to predict the future of the U.S. economy is something we at Marketplace Money tell ourselves and you repeatedly when you want to know things like when will the Fed change interest rates?

Settle: If we had a crystal ball, what would I be doing?

Students: You’d be on the beach… sipping Mai Tais… with girls in short skirts!

Settle: Alright and I’m here with you guys, so I don’t have a crystal ball.

Me either. It’s not something that comes with your high school diploma. And least not mine, Scott.

Jagow: Mine either, but boy those kids are smart! Tess Vigeland, on the road, reporting from Blue Springs High School near Independence, Missouri.