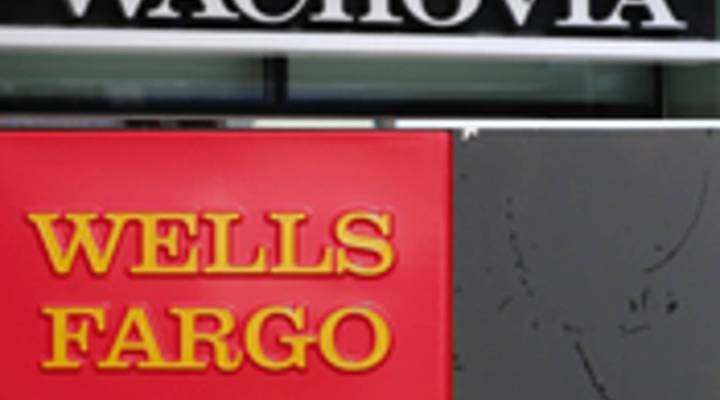 Why Wells Fargo is a better idea

Why Wells Fargo is a better idea

Stacey Vanek-Smith: Something of a corporate cat-fight shaping up this morning. Citigroup and Wells Fargo are duking it out over Wachovia. Early last week, Citigroup had a deal to buy the bank for about $1 a share Then on Friday, Wells Fargo announced its own bid for Wachovia: $7 a share.

Chris Low is Chief Economist with FTN Financial. Chris, the deal with Citi looked done. but then came Wells Fargo and that bid is much bigger.

Chris Low: That’s right: $7 instead of $1. And you know, we all have a vested interest in this one, because the original deal with Citibank left taxpayers potentially on the hook for some of Wachovia’s mortgage loans. So not only is Wells paying more, but they’re also taking the risk. And the reason they’re able to do that, frankly, is that Wells has a better balance sheet. They’re in better shape.

Vanek-Smith: And from what I understand, the Fed has come in, and they’re literally playing King Solomon here.

Low: Yeah, they’re talking about maybe splitting the bank down the middle. But what I’m hearing this morning from analysts is that neither Citi nor Wells is going to be happy with that. And the big issue is neither one wants the piece with California. So . . .

Vanek-Smith: Hey! What’s wrong with us?

Low: Haha, I know! It’s a terrible thing. But that’s where the biggest mortgage exposures are. So if they’re going to take that piece, they want the rest of the country to balance it out.

Vanek-Smith: Why wouldn’t the Fed be jumping at the Wells Fargo offer?

Low: I think they would be. No question it’s in the better interest of us, the taxpayers. It’s certainly in the better interest of the FDIC. The thing is that there is this binding agreement that Wachovia signed with Citibank. So they want to make sure that all of the legal I’s are dotted and T’s are crossed before they back one or the other. The last thing you want is the government stepping in saying that contract’s not valid because we prefer another one.

Vanek-Smith: Chris Low is Chief Economist with FTN Financial. Chris, thanks so much for joining us.