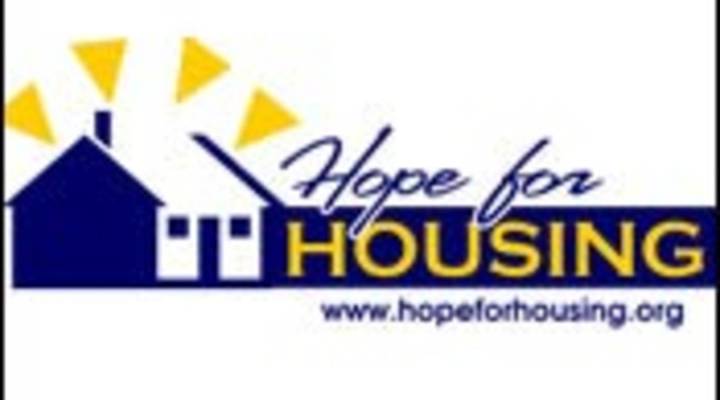 $300 million for homeowners in trouble

COPY
Logo for the Hope for Housing program hopeforhousing.org
Fallout: The Financial Crisis

$300 million for homeowners in trouble

Logo for the Hope for Housing program hopeforhousing.org
Listen Now

Kai Ryssdal: One of the big complaints about Henry Paulson’s original rescue plan and about the version that failed in the House on Monday and about the version that’s on its way to the House tomorrow is that none of them does enough to help individuals with mortgages they can’t afford anymore. Since the whole worldwide economic brouhaha we find ourselves in started with Americans not being able to make their mortgage payments, that’s kind of a big deal.

Yesterday, Washington launched a program called Hope for Homeowners. It’s supposed to help mortgage holders who are in trouble. But Marketplace’s Stacey Vanek-Smith reports a wider solution might take more than just hope.

Stacey Vanek-Smith: Lisa Monrone is three months behind on her mortgage payments. The sociology teacher from Greeley Colorado had been covering them with her home equity line of credit. Then the bank cut that off.

Lisa Monrone: My value went way down, because there are so many foreclosures in this area.

Monrone says her lender started working with her. It lowered her interest rates, which lowered her payments. That kind of private sector cooperation is exactly what the government is counting on to help stabilize the housing market, says Georgetown Law’s Adam Levitin. But, he says, lenders aren’t always willing to take a hit.

Levitin says modifying loans is expensive, but if a home goes into foreclosure, servicers can collect huge fees and get paid first when the home is sold. Levitin says that’s the problem with the government’s Hope for Homeowners plan. It won’t offer real relief because it’s voluntary for lenders. Levitin says Congress’ bailout bill needs to help homeowners, not just stabilize financial markets.

Nick Retsinas In the long run, if we can stabilize our economy, that will stabilize the housing market.

But the clock is ticking, says Levitin.

Levitin: We have a foreclosure machine that is grinding up 6,000 families a day.

Levitin says Lawmakers should modify bankruptcy laws, so homeowners could renegotiate mortgages when they filed for bankruptcy. He says that would help people make their payments and the financial markets could start humming again.