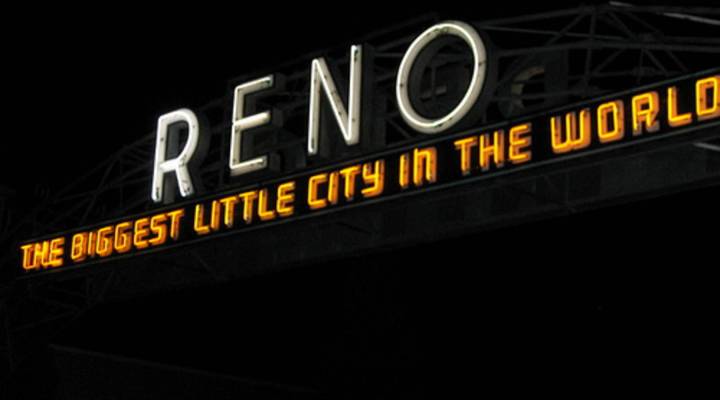 No sign of impending economic doom in the Sierras

No sign of impending economic doom in the Sierras

Hi Amy and blog readers! That was some drive from San Fran. Through America’s Salad Bowl and into the wilderness of the Sierras.

220 miles down… coupla thousand to go.

Just back from dinner here in Reno. I was totally envious of your soul food meal there in Charlotte… until I found this little Vietnamese noodle shop down the street from the casino. Nothin’ like a little pho after a day on the road.

When I got here I decided to roam the streets for comment on the bailout and the economy in general. What I found was striking, but not terribly surprising. At least here in Reno the biting anger seems to have subsided, but both visitors and residents told me they’re still not sure why the bailout is truly necessary. As I’ve mentioned elsewhere — they simply don’t believe that the problem is that bad. If the country slides into recession, so be it, we’ll get through it just like other challenges to the nation. No rewards, though, for the folks who got us here. And that includes not just Wall Streeters, but people who bought homes they couldn’t afford. Interesting to still be hearing that, given the calls for the 700 billion dollars to go directly to fix bad mortgages.

You know what else? They weren’t buying my whole “Wall Street is like a casino” argument. One couple I talked to, up from Texas, said they’d definitely made money over the years from stocks. But they haven’t won anything in towns like this.

Of course all this is just a slice… a small sampling of thoughts and feelings from… LAKE Street. (Not that other street… see, I still haven’t mentioned it.) But hopefully interesting nonetheless.

Off to Salt Lake City tomorrow. Meet me in St. Louis?