Is there an upside here for taxpayers?

Is there an upside here for taxpayers?

Scott Jagow: You know who we haven’t talked to in a while. Mr. Sloan’s been a little busy with covering Wall Street. But I finally caught up with him at home. Allan, when you heard about this $700 billion bailout. What did you think?

Allan Sloan: I was outraged and I said, Are they crazy? Have they lost their minds? They’re going to buy $700 million of stuff from banks, undoubtedly more than the market price, because otherwise the banks have no reason to sell to them. This is somehow going to get banks to loan again? This sounded to me like the biggest trickle-down theory in history, and it made absolutely no sense. Here are we, the taxpayers, and we’re supposed to end up with this garbage to help the banks and nowhere was there any mention of us, the taxpayers, have any upside or any stake in the bank.

Sloan: Well it would, but I think the odds of that are vanishingly small. And my theory is that there are endless things that no one is using. There’s this special borrowing mechanism the Fed set up where you could bring your garbagey assets, borrow against them at a rate that’s now 2.5 percent and that way you would have plenty of money. So, what I was wondering was how come very few institutions and maybe none are borrowing at the Fed and borrowing money that way and using that money to roll over their short-term loans.

Jagow: All right, but now we’re in this situation, instead of buying up bad mortgages, what would you have Congress do if there is going to be a bailout?

Sloan: Instead of buying these assets at too much money and being stuck with them what we could do as taxpayers is put money into the banks and invest in their stock. OK, these banks all need new capital, let’s buy the capital and that way there’s an upside. I’d much rather as a taxpayer have a piece of the upside than these assets.

Jagow: Allan, you’ve been covering Wall Street for a long time, how does this situation compare to previous times when we’ve had calamity, like the S&L debacle, for example.

Sloan: I have never ever seen anything like this. Never. And I’ve been doing this for 40 years. I have never seen such disruption and disaster and potential for even more disaster. I suspect that things were like this before the Great Depression, though I don’t think a great depression is coming. But I was not alive to see that lead-up, so I can’t say from personal experience.

Jagow: All right, we’ll check back with you in a few days, Allan. Allan Sloan from Fortune magazine, thanks. 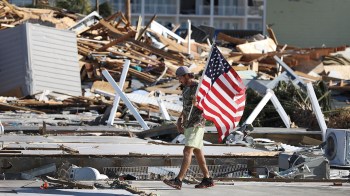 The government is buying up mortgages with climate risk — report