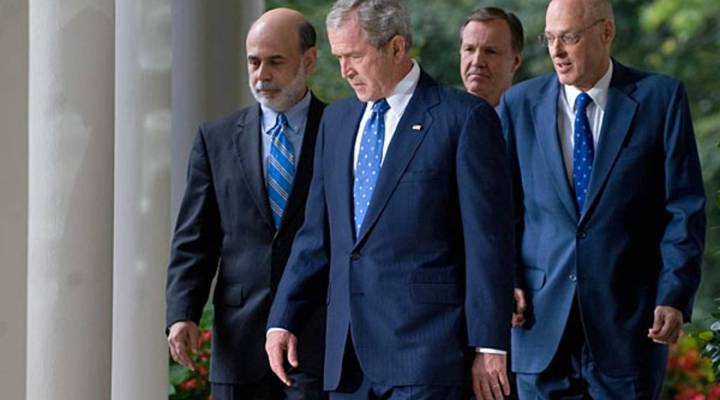 TESS VIGELAND: Speculation says the final product of this bailout will look something like the Resolution Trust Corporation, or RTC, which bailed us out of the savings and loan crisis. No matter the final version, as Jeremy noted, we’re all now holding that bad debt.

For more on what that means we turn to a familiar voice. Robert Reich, thanks for being with us.

VIGELAND: Let’s talk, first of all, about who is at risk as we look at the possibility of an RTC-like agency.

REICH: Taxpayers. And we don’t know at the risk of how much money. Because the RTC, remember, took over the bad debts of hundreds of savings and loan institutions — something on the order of $400 billion — and then resold those assets off so that the American public, taxpayers, were not stuck with that huge bill, something far less. This time around, though, nobody knows what the bottom is. It could be many multiples of that.

REICH: It’s a scary number and nobody should be alarmed. But at the same time nobody should underestimate the potential liability on taxpayers.

VIGELAND: So what exactly does that mean for us?

REICH: Well, it means that if the worst happens and the economy does not recover, or these pieces of paper have very little value because the underlying loans are not going to be repaid, well that means that taxpayers get left holding the bag. Which, in turn, means that the debt — the federal deficit and the federal debt — go much, much higher. And, if that happens, then first we can’t do a lot of things we would like to do as a nation. And foreigners may get a little bit nervous about the faith and credit of the United States. And they may slow down even more than they are already slowing down their willingness to lend us money. And that results, potentially, in a further drop of the dollar. Which means everything we buy from abroad costs more.

VIGELAND: I thought this idea that came out today was supposed to make us all feel better.

REICH: Well, it certainly made a lot of investors feel better. And maybe it’ll work. But, you see, Tess, this is the problem. The crisis on Wall Street right now is less about solvency and about capital than it is about trust. And the real question is, How do you restore trust to a system in which, basically, nobody trusts the numbers that are supplied by big banks on securities?

VIGELAND: Well, let me ask you to answer your own question there. Or try. How do you generate that trust? What is the alternative?

REICH: Well, the answer is regulation. There’s just all sorts of areas that beg for more transparency. And until you get that much transparency, people are just not going to trust what Wall Street is telling them.

VIGELAND: Why didn’t the government take this sort of radical action earlier?

REICH: Well, the kernel of the idea — that is, have a separate agency take the bad debt off the books of some of these banks and then resell them just like the old Resolution Trust Fund — that may make some sense in the short-term. But there’s no reason the taxpayers have to be involved. You could do this by a kind of reorganization under bankruptcy, a kind of big Chapter 11 process. You don’t have to call it bankruptcy. You could call it a kind of emergency reorganization of financial institutions. Or you could call it liverwurst. It doesn’t matter. You just basically eliminate all of the investment value in these banks and all of the focus would be on making creditors as whole as possible.

VIGELAND: Alright folks, you heard it here first. Liverwurst is the answer. . . . Thank you so much, Bob.