Here’s an opportunity that’s a little closer to home for you. Home Depot is rolling out dramatic price cuts in the next three weeks. Some prices will be cut in half. So, what’s Home Depot thinking here? Rico Gagliano reports.

Rico Gagliano: Retail analyst Paul Nolte says the company’s preparing for the best of times — or the worst of times.

Paul Nolte: I think Home Depot’s cutting their prices in an effort to kind of get themselves a lot leaner to take advantage of any upswing that we may see in the economy, as well as to maybe insure themselves a little bit on the downside.

Here’s the strategy: If the economy recovers, a cleared-out inventory could allow Home Depot more easily restock with what consumers want. Meanwhile, the sale should generate cash the company can use to pay off credit debt, a good idea if the economy keeps tanking.

Home Depot can probably afford these low prices, short term. But some analysts warn the move could trigger a price war neither it nor competitors like Lowe’s can afford. Paul Nolte disagrees.

Nolte: I don’t think they’re gonna wind up in a price war necessarily. What they’re doing is they’re reacting more to the economic situation and the lower spending by consumers.

Gagliano: They’re more in a war with the economy.

Nolte: Yeah. Survival, if you will. 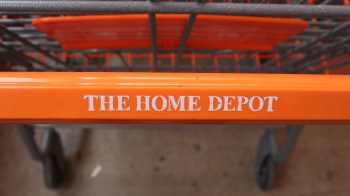 Is a rise in store theft at Home Depot really linked to the opioid crisis?