KAI RYSSDAL: If you’re just catching up with social networking, here’s a quick primer for you. You’ve got your professional networks — sites like LinkedIn. You’ve got your social sites — that’d be Facebook and MySpace. And then, if you’re really hard core about this, you’re a Twitterer. That’s derived from the name of the site, Twitter.

It’s not a big money maker. At last count, it had less than half a million active users. Facebook, just by way of comparison, has 100 million. Even though they’re small in number, Twitterers are a powerful group. And companies looking to make quick contact with customers have taken notice, as Jennifer Collins reports.

JENNIFER COLLINS: For many of us, this is the sound of customer service:

For C.C. Chapman, customer service took on more of a cyber tone. A couple months ago, Chapman bought a 52-inch Samsung TV, turned it on and . . .

C.C. CHAPMAN: First it was letterbox and then it had these weird white lines on the border, on the edges.

Chapman was trying to watch a Celtics playoffs game. He’s from Boston. Nothing stands between him and the home team. But instead of dialing up his cable company and sitting on hold until the second half, Chapman logged onto the social networking site Twitter and sent out this message:

CHAPMAN: Man, my new HDTV isn’t looking so great with Comcast. I’m not sure what’s wrong.

CHAPMAN: Within literally under five minutes, Comcast sent me a reply on Twitter and said, “Hey, C.C., what’s your problem? Maybe I can help you.”

The cable giant is one of several companies that get alerts when their names pop up on Twitter. JetBlue, Zappos and H&R Block all have representatives on the website. Even some chief executives have been known to tweet.

Howard Rheingold teaches virtual communities at Stanford University. He says more companies should use sites like Twitter to improve their customer relations.

Howard Rheingold: If you’re interested in real customer service, I couldn’t think of a better way than having someone give you an instant answer.

Of course, most company have help pages on their own websites. But customers say Twitter is a lot faster. And Twitter’s design makes it easy for companies to address their customers’ problems in real time. And then there’s the publicity factor. Twitterers tends to be pretty vocal. C.C. Chapman shared Comcast’s good deed with all of his friends on Twitter. And he knows how that can pay off. Chapman works in marketing.

CHAPMAN: Many of these other companies who are doing things online and talking to bloggers or reaching out to them, they know exactly what they’re doing because it’s a marketing thing. I mean, they want them to blog and podcast and mention it.

And some companies hope that good publicity counters bad. Remember that Comcast repair guy who fell asleep in a customer’s living room while on hold with his own company? He ended up on You Tube and galvanized legions of angry customers who launched ComcastMustDie.com. Well, the cable giant heard them. The website recently declared Comcast “tone deaf no more.”

Frank Eliason can take at least some of the credit for that. He’s the Comcast rep on Twitter.

FRANK ELIASON: You know my biggest goal is to turn any customer around. So if someone wants to say something negative about the company. . . .

… in front of five thousand of their closest friends.

ELIASON: I do want to help them.

And Eliason appears to be gaining fans — or at least curious onlookers. He has more than 3,000 followers on Twitter. 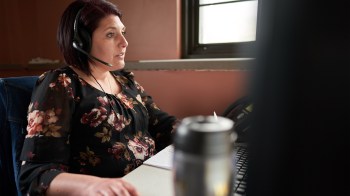