Assessing the situation on Wall Street

Assessing the situation on Wall Street

Stacey Vanek Smith: Lehman Brothers has filed for bankruptcy protection. It’s the largest failure of an investment bank in almost 20 years. Lehman was the country’s biggest underwriter of those now-toxic mortgage-backed securities. It had been trying to sell off some of its more valuable parts, but yesterday, the last of the buyers backed out. And Merrill Lynch is now the property of Bank of America. The country’s largest brokerage agreed to sell itself to BofA for about $50 billion, that’s roughly half of what it was worth last year. And Wall Street is already buzzing about who will bite the dust next. Jim Rogers heads up investment firm, Rogers Holdings. Jim, how serious is this? Is this part of a natural correction?

Jim Rogers: Stacey, it is part of a correction, but the correction is going to go on for some time. You know, America is going to have the worst, is having the worst financial and perhaps economic times since the second World War.

Vanek Smith: Who are the winners and losers going to be?

Rogers: Well, commodities. Our real assets are natural resources. All those people who got MBAs should have been going to agricultural school in the past 20 years.

Vanek Smith: The government has basically made a decision not to help bail out, they’ve made the decision not to bail out Lehman the way they did with Bear Stearns. Is that a mistake or is that the right move?

Rogers: No. They should not have bailed out Bear Stearns. That was the first mistake. Bailing out Fannie Mae and Freddie Mac was another mistake. What’s happened, Stacey, is the federal government now realizes it doesn’t have many bullets left. It’s used up a lot of its assets bailing out people, and now if you look at the Federal Reserve, it’s terribly overextended. The Federal Budget is terribly overextended. The debt situation is overextended. And you say they decided not to bail out Lehman, that’s correct. But what they did do, they also said, we will let people, banks, financial institutions now come and borrow even more money from us with even less collateral.

Vanek Smith: And just really quickly, what are we going to see in the next six months?

Vanek Smith: Well, Mr Rogers thank you so much for speaking with me. I really appreciate it. 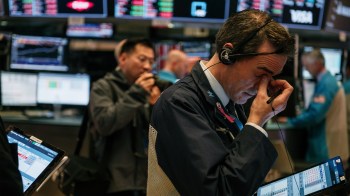