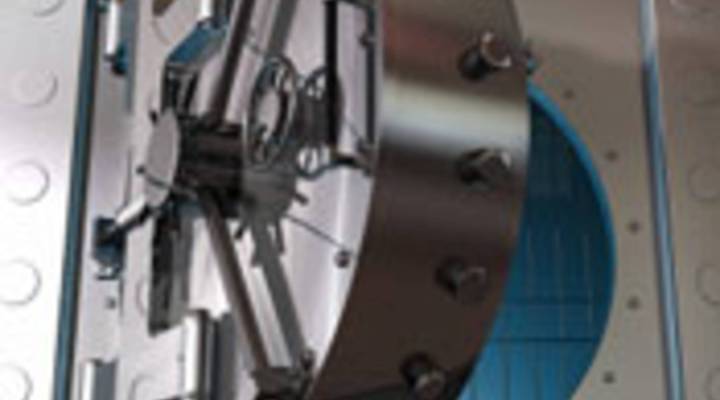 No such thing as a sure thing

COPY
The recommendations established in the Basel II accords hope to ensure banks exposing themselves to greater risk hold greater capital to shield their depositors. iStockPhoto

No such thing as a sure thing

Tess Vigeland: You may remember a couple of weeks ago we talked to Josh Cook in New York. He not only held onto Fannie and Freddie stock; he waded in deeper.

Well, we called him again this week and his toes are trying to find the bottom.

Josh Cook: After losing 80 percent, maybe even 90 percent of what I put in, there’s no point in getting out. And then now that it’s down to a dollar, it seemed like it made sense to buy one more round. I bought 300 shares because they’re a dollar each and so it cost $300.

Only $300… We’ll check in with Josh again later in the year to see if he makes any money on the deal. He seems to think it might be a sure thing and it’s a familiar kind of confidence for investors who held on to Bear Stearns or IndyMac or Lehman Brothers or Washington Mutual.

Economist Diane Swonk joins us to talk about “sure things” and Diane, was Fannie supposed to be one?

Diane Swonk: No, it wasn’t. That’s a whole point, you know. I mean, that’s what really gets me mad is now it is a sure thing on bonds and for stockholders it might be a thing depending on how this all works out and to be honest with you, Fannie and Freddie were never… I mean, they were this high-bred private company with private shares, you know, publicly-traded shares, subsidized by the U.S. government. I mean, it was insane. Shareholders were getting subsidies by the U.S. government to get extraordinary returns and the biggest beneficiary of those returns were the senior management of Fannie and Freddie Mac.

Vigeland: I want to ask you about something that came up in our editorial meeting this week, which was the question of whether there is any such thing as a safe investment. Fannie and Freddie, I think there was a perception that they were too big to fail and I think by most definitions, they have now failed and you know, you look back to auction-rate securities and these were supposed to be, you know, the safe place to put your money and I wonder, given that we keep hearing all these safe havens are gone, where are you supposed to go?

Swonk: Well, you’re supposed to do it the way you were supposed to do it in the first place. It’s an oxymoron to say something is a fail safe investment. Investment requires risk and return. If you want a low-risk investment, you invest in something like Treasury bonds, hoping the U.S. government doesn’t default on them at some point in time. They’ve been pretty good on not doing it, although their debt’s getting large — especially as they do more bailouts. But the reality is that’s the whole thing. Investors need to weigh the risk and return ratio. They need to think aggressively and if they don’t do it, they should hire someone.

Vigeland: But there were people who were advised that auction-rate securities were the way to go?

Vigeland: That’s easy to say in hindsight, but…

Swonk: Anyone who tells you money grows on trees, you know, come on! You know, I do think there’s fraud out there, there definitely was some misleading of investors, but this is a two-way street.

Vigeland: I wonder given what’s happened with Fannie and Freddie and I look back to IndyMac this year and Bear Stearns, is it a good idea for anyone to put too much faith in individual stocks.

Swonk: Well yeah! Yes, absolutely, I mean, you’ve hit the nail on the head here and that is that diversified portfolios are the key to anyone’s portfolio. You’ve got to make sure that sometimes when some things are going up, some things are going down in your portfolio and that’s OK. My concern is because we’ve made these things too big to fail, frankly the shareholders are still not completely out at Fannie and Freddie. That’s the bad news, because it’s saying “You know, maybe investors, you might make it OK if you only invest in the too big to fail companies, because you might get bailed out.”

Vigeland: What, if any, advice would you have for folks that are still holding on to their Fannie and Freddie stock?

Swonk: Well, there’s not much they can do right now. The most important thing is where do you make your investments going forward. Because it’s in a suspended animation state, there’s really not much they can do, but going forward, making investments that are more diversified, never believing a sure bet with high returns, it’s an oxymoron. I think that one of the most important lessons to remember is it’s time like these that people make their fortunes, even if the market’s volatile, even if it’s not making money for you next week, over the next five to ten years or the next 20 years when you go to retire, it’s going to be there for you then.

Vigeland: Diane Swonk is chief economist at Mesirow Financial in Chicago. Thanks so much for your time today.