Stacey Vanek-Smith: The Democratic National Convention wrapped up last night. Sen. Barack Obama accepted the party’s nomination and delivered an acceptance speech. It was all about the economy. Obama criticized the economic policies of rival John McCain, who he said just doesn’t get it.

Tape of Barack Obama: How else could he propose hundreds of billions in tax breaks for big corporations and oil companies, but not one penny of tax relief to more than 100 million Americans?

Obama called for a middle class tax cut an end to capital gains taxes for small businesses. He also promised government help for the U.S. auto industry. Domestic car makers aren’t the only ones suffering. Toyota says it will cut production in the UK, partly because of a slowing European economy.

Stephen Beard: Compared with the bloodbath in the American market, British car production had been holding up. Toyota is the second biggest auto maker in the UK, and it was considered a center of stability and calm. But that tranquil image has now been dented. Toyota says it will cut the output of its British factory. Over the next five months, it will make 15,000 fewer cars for the European market. This is worrying, says David Bailey of the Birmingham Business School. We’re not talking about gas-guzzlers here.

David Bailey: The car being affected is the Toyota Auris, which is a small compact-size car, fuel-efficient actually. So I’m surprised that they’re having to cut production, but clearly with the slowdown in the economy things simply don’t add up.

Toyota has now temporarily abandoned its boldest ambition: to become the first manufacturer in the world to sell 10 million cars a year. 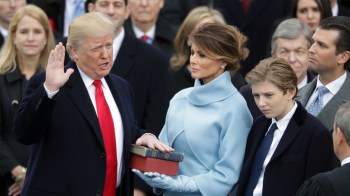 Trump’s been in office three years. Is the economy better?