Several hundred colleges have either stopped using trays in their cafeterias or plan to soon, according to an Associated Press report. By serving food on plates, college officials say they save water, cut costs, reduce food waste — and help students keep off extra pounds from overeating.

“So if a college is looking to go ‘green,’ they need to start looking in the dining facility,” Zimmer said. 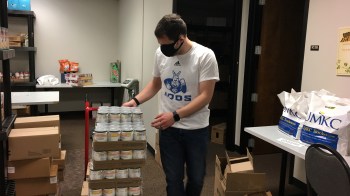