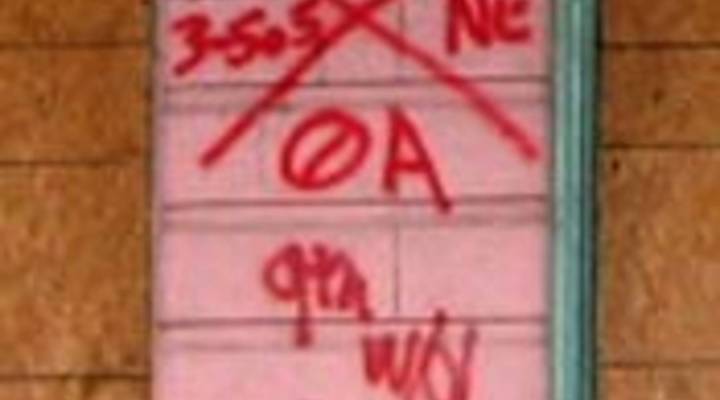 Why have we abandoned New Orleans?

COPY
A pink house in New Orleans still displays the X with coded numbers that rescue teams used to indicate when the house was searched and how many bodies were found after Hurricane Katrina. It's a scar that still marks tens of thousands of homes across the city. Tess Vigeland / Marketplace

Why have we abandoned New Orleans?

A pink house in New Orleans still displays the X with coded numbers that rescue teams used to indicate when the house was searched and how many bodies were found after Hurricane Katrina. It's a scar that still marks tens of thousands of homes across the city. Tess Vigeland / Marketplace
Listen Now

TESS VIGELAND: Some final thoughts on the Big Easy, three years post-Katrina. There are lots of firsts for new visitors to New Orleans like me. The first nighttime ramble down Bourbon Street. The first tastes of gumbo and beignets. The first blast of hot, wet Louisiana air. And today — if you venture out of the tourist zone — there’s your first heiroglyph. That big X with coded numbers that rescue teams used to indicate when the house was searched and how many bodies were found. It’s a scar that still marks tens of thousands of homes across New Orleans.

I saw my first as I was driving north on Elysian Fields Avenue, probably a mile-and-half or so from the French Quarter. It was a bright pink house with turqoise-blue trim. The front doors and windows were boarded up.
A red heiroglyph showed it was inspected on September 11th, 2005 — 13 days after Katrina.

I kept driving — past another. And then another. House after house STILL boarded up, STILL marked up. It shocks the conscience to think that it’s been three whole years since Katrina, and on this main drag it looks like it’s been maybe a month or two.

As I kept driving toward Lake Pontchartrain, I started to cry.

Over the next several days I walked and talked with a dozen New Orleanians trying to re-populate neighborhoods like Gentilly, Mid-City, Lakeview, the Lower 9th Ward. I asked them how they drive through the city day in and day out without crying. “Booze and pills,” said K.C. King. He was only half-joking. And then he said: “I guess you get used to it.”

I guess the rest of us have gotten used to it, too. We’ve heard and read so much about how NOLA was back up and running. And the French Quarter? Downtown? Almost like nothing happened. So what I expected — what I envisioned — was recovery.

What recovery? Today we’re one year shy of the amount of time it took to rebuild Europe after World War II.
And there is nothing resembling a Marshall Plan underway in New Orleans.

I’ve been tyring to figure out for the last few weeks why I’m so profoundly upset by that. I have no personal stake in New Orleans. I don’t have family there. I don’t have friends there — or, I should say, I didn’t.
And I remember back three years ago when there were questions about whether to even rebuild the city?
I wasn’t sure what the answer should be.

But that’s when all I really knew of the disaster was through the hundreds of articles I’d read and the hours and hours of coverage I’d watched on CNN. It’s different to walk on that ground that became a lake floor for two weeks. Ground that now boasts cracked sidewalks, potholes and slab foundations engulfed by 4-foot-tall weeds.

Each evening after spending the day out in the neighborhoods struggling to survive, I’d return to the French Quarter to get a taste of the old New Orleans. One night I stopped in for a Sazerac at the famous Carousel Bar, and I struck up a chat with my stool mates. It was a young couple visiting for the weekend from Northern Louisiana. I was sharing some of these same observations with them when the husband looked at me and said, “They chose. They chose not to have the proper insurance,” he explained. “They chose to live in a bowl.”

It is so vastly more complicated than that. But there’s the sentiment — even from a fellow Louisianan. It goes a long way toward explaining why three years later we have collectively abandoned New Orleans. And, why those who chose to return remain pioneers in their own city.