Kai Ryssdal: There are plenty of people out there who’ll tell you that in this digital age newspapers aren’t good for much of anything except fish-wrap. But then you run across a story about actual fish. Today’s New York Times has the tale of a couple of high school students in Manhattan who got curious about their sushi and whether they were actually getting the delicacies they had ordered. Katie Stoeckle took a lead from her scientist dad. She tried something called DNA barcoding, a way to genetically identify a species of, say, fish, that’s simpler than sequencing the whole genome.

Kate, good to talk to you.

Kate Stoeckle Hi, good to talk to you too.

Ryssdal: Listen, not every high schooler decides to DNA test their sushi. Where’d this idea come from?

Stoeckle: Well, my dad has been involved in barcoding for a long time, so I’ve sort of grown up listening to dinner table conversations about barcoding. It’s always been on my mind, and my friends and I love to go eat sushi. So we were wondering if you could apply the DNA barcoding technology to find out what fish we’re eating.

Ryssdal: So, what exactly did you do?

Stoeckle: We would go to different restaurants and stores in New York City. We bought fish and we snipped off a tiny little snippet of the sample. We stored them in alcohol vials. And then we sent them to a lab in Canada where they sequenced the DNA for us. And then, when we got the results back, we found that a quarter of the samples were mislabeled.

Ryssdal: What were some of the most egregious examples you found of this mislabeling?

Stoeckle: Yeah. There were nine samples labeled as red snapper, and seven of them were not. And among those seven, one was actually the endangered species Acadian redfish.

Ryssdal: Ooh, that’s not good. And what about the tuna example you found?

Stoeckle: Yeah. There was a, it was labeled as while tuna and it was actually Mozambique tilapia, which is sort of a cheap farmed fish.

Ryssdal: There was a little element of caveat emptor here. I mean, in a place as crazy for sushi as New York City, people are out there getting tilapia instead of tuna.

Stoeckle: I know. You know, and I think one of the important things about this is consumers really should be getting what they pay for. So it’s sort of like when people sell fake designer labels. You’re paying the money for a brand, you should be getting that quality.

Ryssdal: How much sushi did you buy actually for this experiment?

Ryssdal: Did you guys spend your own your money, or did you spend Dad’s money?

Stoeckle: Yeah, mostly it was our hard-earned money, so. [Kai laughs] But it was over a long period of time.

Ryssdal: Now, I understand that you’re not interested in revealing exactly which restaurants are mislabeling their product for fear of lawsuits.

Ryssdal: But did you tell the restaurants that they were mislabeling?

Stoeckle: No, we haven’t spoken to them. You know, we’re not even sure that the restaurants themselves are aware that they are selling mislabeled fish. So, we don’t know where the mislabeling occurs. It’s probably not the fishermen. And it may not even be the restaurants. So, we’re not sure yet.

Ryssdal: Any inquiries from the New York City Department of Health, or any of those guys. Consumer Affairs? Has the mayor call you?

Stoeckle: No, not yet. [laughs]

Ryssdal: All right, so this is a big science coup for you. You’re on the front page of the New York Times. Are you gonna be a scientist when you go off to school this fall, to college?

Stoeckle: You know, I’m not planning on it just yet. I think that’s another interesting about the project is that I’m not a typical science student. You know, I’m interested in science, but I also like writing and psychology. So, you know, if someone like me can get involved in a project like this, it shows that other people can do it too It’s not just for the strictly science student. 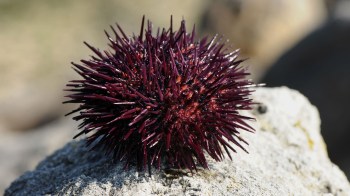