More airlines going down this year

More airlines going down this year

Stacey Vanek-Smith: Oil is back up a bit today, around $116 a barrel. That’s very bad news for airlines. They’ve been slammed by high fuel costs and have been looking for new ways to make money. American Airlines just rolled out Internet service on some of its planes. For about $13, passengers can surf to their hearts content.

But it’s going to take a lot more than e-mail to help the airline industry. The International Air Transport Association, or IATA, says the global aviation industry is likely to lose more than $6 billion this year. From London, Stephen Beard has more.

Stephen Beard: Twenty-six airlines around the world went out of business or into bankruptcy protection in the first half of this year. That’s a higher rate of failure than in the aftermath of 9/11.

IATA is bracing itself for more trouble. A further dozen carriers are thought to be on the brink of going bust. All regions are under pressure. Even China and India are seeing a slowdown.

Lorne Riley: What we have is a perfect storm. Rising record level oil prices and a global economic slowdown that is slowing traffic growth. Together, it spells a gloomy picture for airlines around the world.

IATA says there is a way out of the crisis: More carriers should be allowed to merge. An argument that many governments and regulators are resisting. 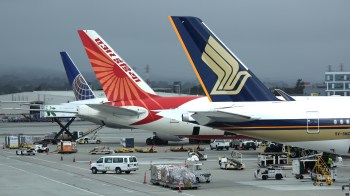