Gold medalists aren’t the only winners coming out of Beijing. NBC’s says it’s expecting profits from advertising during the Games to top $100 million. The nine-figure payoff’s being seen by some inside the television industry as vindication, because critics have said for years network television’s a dying breed. But the Olympics may be a one-off. General Motors announced today it’s not going to sponsor next spring’s Academy Awards, another made-for-TV event if there ever was one. Marketplace’s Jeff Tyler has more.

Jeff Tyler: Michael Phelps and his eight gold medals helped attract big audiences to NBC. In fact, the network has beaten its own forecast to its advertisers.

Joe Adalian So far, NBC has gotten everything they’ve ever wanted from the Olympics and more.

Adalian: You can get just as many eyeballs if you advertise on enough cable networks, but you’ve got to spread your money around. With network TV, it’s the only place you can get 40 million people in one sitting.

Nonetheless, marketers across the board are cutting their budgets. General Motors has decided against sponsoring the next Academy Awards. Such events charge a premium for ad space. Mitch Oscar is with the advertising agency MPG. He says companies often have two motivations for making that extra investment.

Of course, the economic downturn isn’t helping. The Olympics and NBC bucked this trend thanks to ad revenue from some unusual buyers — as in, presidential candidates. Again, Joe Adalian.

Adalian: Barack Obama and John McCain each spent between $5 million and $6 million on advertising on NBC during the Games.

Unfortunately for ABC and its advertising prospects, the presidential campaign will be over long before the Oscars broadcast. 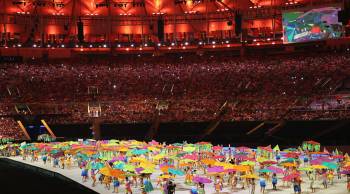