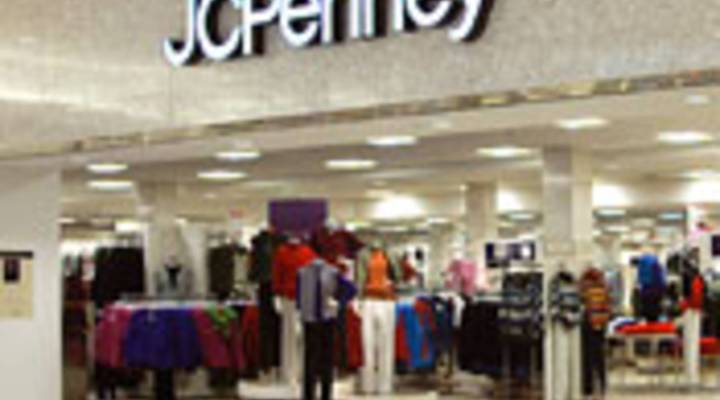 Department stores trying to be hip

COPY
A JCPenny store in a mall jcpenny.com

Department stores trying to be hip

A JCPenny store in a mall jcpenny.com
Listen Now

Tess Vigeland: Back-to-school fashion this year is all about “rich, saturated hues that pop against neutral basics and dark denim!” Oh, and don’t forget leggings and fun layering pieces!
I learned all that from fashion central: About.com. They’re the Tim Gunn of the Internet, right? So now, where do we find those things? Well, JCPenney thinks it should be our cool-for-back-to-school destination.
So does Abercrombie. But today both reported a drop in second quarter profits. Familiar story throughout the retail industry. Marketplace’s Nancy Farghalli tells us, for many stores, it’s time to make it work.

Nancy Farghalli: Jennifer Jones shops with her mom and sister at a mall in Los Angeles. And this 18 year old has her list of favorites.

Some older retailers, such as Sears, want to snare customers like Jennifer by re-launching their image. But a brand like Sears faces a real challenge. Tracy Johnson is Jennifer’s mom.

Tracy Johnson: I usually buy all my tools and appliances from Sears. But, I don’t go there for clothing.

Well, you can’t really wear a washer to school. But Sears has a $5 billion apparel business. And the company wants to add a little edge to its softer side. Sears is introducing a new line of streetwear from LL Cool J. And it signed teen star Vanessa Hudgens of “High School Musical” to appear in back-to-school ads. Richard Gerstein is the chief marketing officer for Sears.

Richard Gerstein: We are not top-of-mind with that 12- to 18-year-old customer, and that’s really what a lot of this focus is about, is becoming relevant.

So, how do you gain traction with that customer? Call in MTV. Sears partnered up with MTV for the television movie, “The American Mall.” It premiered this week on the cable channel. In the film, teens wear clothes from Sears and talk about teen things near a Sears store.

Girl [in a movie clip]: OK, what happened?

Another girl [in a movie clip]: I got dumped. No call, nothing.

Gerstein says Sears will carry music, jeans and graphic tees from the movie.

Gerstein: This teen and tween have to believe that this is the place they want to shop. So when mom says, “How about going to Sears?” That person says, “Hey that would be great cuz they’ve got real cool clothes.

Staying hip means staying ahead of the curve. Brandi Stansbury is a trendspotter. She tells companies what teenagers want. And she has a warning for Sears.

Brandi Stansbury: The important thing for these companies is they can’t try too hard.

Stansbury uses JCPenney’s back-to-school ccommercialsas an example. The ads feature scenes modeled after the ’80s film “The Breakfast Club.” Stansbury says teens in her focus groups aren’t buying the cool movie, cool clothes idea. She says teens don’t like to be told to like something because it was hip two decades ago.

Stansbury: Teens aren’t stupid. And they know when they are being marketed to. They don’t really like those commercials right now.

But sometimes companies miss out on marketing opportunities. Take the restaurant chain Denny’s. It realized that late night diners are the most profitable part of its business. Mark Chmiel is the chief marketing officer at Denny’s.

Mark Chmiel: Late night was one that we realized we had not been marketing to as strongly as we could have.

Denny’s saw an opening. A majority of its late night diners are under the age of 25. Chmiel says many of them don’t want to go to fast-food rrestaurants

Chmiel: They were sort of getting tired of the drive-thru and the arm coming out of the window. They said,” Well, we want to keep the camaraderie going.”

Which means, being able to hang out with friends in a booth and share food. So Denny’s introduced a special late-night menu this summer, and the chain even invited hot bands to create some of the food with its head chef. If you like the rock group The Plain White Tees, maybe you’ll like their white milkshake.

Chmiel: Vanilla ice cream, cheesecake, white chocolate chips. They wanted to be white but in a funky way.

The funk seems to be working for Denny’s. The late-night-only menu continues into the fall, just in time for cram sessions.