Will the Euro continue to fall?

Will the Euro continue to fall?

Scott Jagow: You know when you find a dollar bill in your laundry and it’s all crinkled up and tattered? That’s been the state of our currency the last couple of years. Anyone’s been to Europe knows that first-hand. It’s affected the price of oil. It’s behind inflation. But the dollar’s looking a little crisper of late. Last week, the euro fell more than 3 percent against the dollar. Alisa Roth reports.

Alisa Roth: The currency market is settling down this morning after a crazy week last week. A euro is worth about $1.50 now, but it did drop below that briefly today. And currency watchers are wondering whether the European currency will continue its fall this week.

Dave Solin is with Foreign Exchange Analytics. He says news that the effects of the mortgage crisis spreading to Europe have been good for the dollar.

Dave Solin: The view is that the U.S. was kind of the initial one into these set of problems. That the rest of the globe will be economically impacted and the U.S. will be first one in, first one out.

He says the falling oil prices have also helped, since a lot of people associated high oil prices with a weak dollar.

But it may be too soon to celebrate the return of the mighty greenback. Solin says he thinks a lot of the gain is just correction for the long fall over the last couple of years. 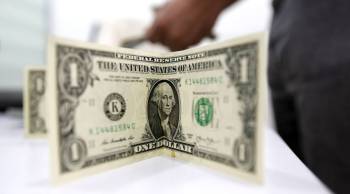