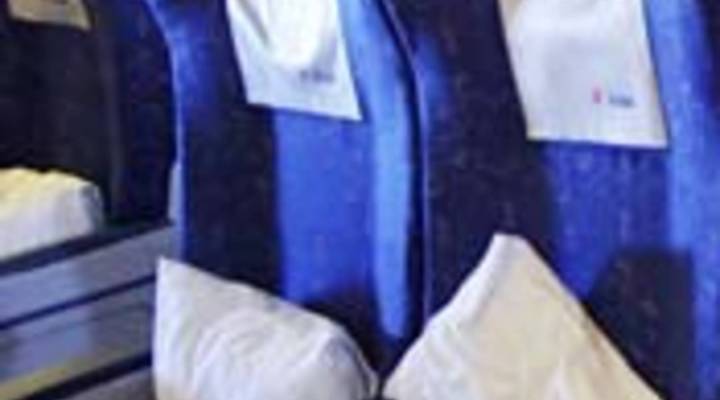 Bracing for a bump at the airport

Bracing for a bump at the airport

Tess Vigeland: So, do the airlines not want customers? Because they seem to be doing everything in their power to tee us off.

This week, JetBlue added pillows and blankets to the list of extras you’ll have to pay for and according to a government study fully one quarter of all flights were late in the first half of this year.

But even worse than leaving or arriving late is not getting to leave or arrive at all. It goes something like this: “I’m afraid this flight’s been overbooked and I don’t have a seat for you. Um, sorry?”

So what can you do? I bet Scott McCartney knows. He writes the Middle Seat Column for the Wall Street Journal.

Thanks for sitting with us.

Scott McCartney: Good to be with you.

Vigeland: Can you still get compensated if the flight is overbooked and you’re involuntarily bumped?

McCartney: Yes, you can. In fact, the government recently doubled the amount that the airline has to pay to you for a penalty for bumping you from a flight involuntarily up to as much as $800 now, which I think is a more appropriate level. The level hadn’t been changed in 30 years, it was only $400 and there was too much incentive for an airline to bump somebody, pay a $400 penalty and put somebody on the airplane who’d pay $1,000 for a seat.

Vigeland: Can you explain to us quickly why airlines have this business model where they do so much overbooking?

McCartney: You know, it’s really unique in business and they did get permission years ago from the government to do this. The theory is that some people don’t show up for flights and the airlines face a real problem where they can’t inventory their product; once the door closes, that seat is gone, and in that case, the government allows airlines to overbook so that they don’t end up with empty seats.

Vigeland: There are some people who actively look to get bumped because they want these free tickets or vouchers, what have you. I’ve done it myself; In fact, I’m sitting on $1,200 worth of Delta dollars because I got bumped a few months ago. Is this a good idea?

McCartney: It can be. You have to sort of know the rules and you have to know how to game the system. You’re right; there are people that try very hard to get bumped. They book crowded flights on Friday evenings knowing that the airline’s likely to start asking for volunteers. And then there’s the game of when do you volunteer? The airline starts low, maybe offering $200 to people to give up their seats and if nobody comes forward, they go higher. A couple cautions: One is that those vouchers often come with restrictions. They can be difficult to redeem. It may only apply to certain fare categories. Some airlines are better at allowing you to use them electronically and others require you to do it over the phone or in person, even.

Vigeland: In which case, they’ll probably charge you.

McCartney: Right, so you need the assistance of one of their agents and that’s a $20 or $30 charge.

McCartney: You have to be tricky on that end and I think the other thing you have to watch out for these days is because flights have been so full, it may be some time before there’s an empty seat to get you where you want to go or if you’re just going to be on the standby list, it could be two days before you get an empty seat. You may have walked into something far worse than you bargained for.

Vigeland: Well, aside from a voucher, is there anything else you can negotiate for when you are bumped?

McCartney: Not if you voluntarily give up your seat, but if you are involuntarily bumped, the airline, by law, has to pay you cash. Now, most airlines don’t want to do that and may not offer you cash, but understanding your rights, you can demand cash from the airline. If the airline can get you to where you’re going within two hours of your original schedule, the penalty is the value of your one-way ticket, up to $400, and if it’s more than two hours, which in most cases it would be, it’s up to $800 maximum.

Vigeland: What about, say, if you requested to be upgraded on that next flight that they’re able to get you out on? Maybe try for first class?

McCartney: You can certainly try. That’s basically up to the airline. It’s going to depend on how good a customer you are, what your fare was, things like that. These days, airlines are really hesitant to give out upgrades. They’re trying to sell first class seats, they’re trying to sell upgrades to people, so that may be more difficult to land than it used to be, but certainly worth a try.

Vigeland: Scott McCartney writes the Middle Seat Column for the Wall Street Journal. Thanks so much for joining us again today.

McCartney: Always good to be with you, Tess.