Kai Ryssdal: Seven percent would be a pretty good return on your money even when the markets are up. This year, it’s just plain terrific. The Wall Street Journal reported this morning Harvard University made somewhere between 7 and 9 percent on its endowment during its most recent fiscal year. That leaves the school with $35 billion in the bank.

Harvard didn’t get flush by being wasteful, but every year the university gives away warehouses full of used property: desks, cabinets, cubicle partitions, that sort of thing.

And Every week, workers haul it all outside and let members of the public lug it away for free. Recently, the global economy has started to play a role in the give-away.

There’s a guy in overalls pulling PVC pipes out of a giant bin. A grandmotherly woman is hefting a laser printer into an office chair and then she’s pushing it along like it’s a shopping cart. And all around me there are men with hand trucks hauling away filing cabinet after filing cabinet.

Off to one side, eight-year-old Jemma and her mother are holding hands as they look on. It’s their first time here.

Jemma’s mother: We just had heard about the free stuff, so we thought we would check it out and it looks kinda like a zoo.

Jemma: This is going crazy!

Jemma’s mother: It is going crazy. Let’s watch out so that we don’t get run over.

I lose them in the crowd, but soon I’m talking to Sergio Lopez. He’s one of the hand truck guys and I ask him what he could possibly do with so many filing cabinets.

Sergio Lopez: I come to pick up the metal. I go get a little money, you know, for the metal.

That’s Rob Gogan. He’s associate manager for recycling and waste at Harvard University and he’s been overseeing this event for years.

Gogan: They pull out file cabinets, pipes and pumps, springs and sprockets and even nails and screws.

Since January, the price of U.S. scrap steel has doubled, from $350 per ton to $700. That’s because in China, Russia and Brazil, booming construction is fueling the demand for scrap steel at the same time as the U.S. dollar is depreciating. So now, recyclers can make more money than ever selling scrap, which not everyone is happy about.

Danny is a tinkerer and craftsmen who’s looking through a bin of computer parts.

Danny: My real pet peeve is you’ll see a nice piece of equipment and you go to pick it up and you find out that one of the scrap metallers have come by with a pair of pliers and just snipped the power cord off, so it’s now useless. It’s now a piece of junk because they wanted the five cents worth of copper that was in the power cord.

Gogan: Our intention and our hope is that furniture will be recovered for maximum utility, for reuse.

Gogan: Sometimes, people say “Well, you should give first preference to people who are going to reuse the furniture,” and I would like to, but I don’t have the staff to monitor and police who gets what.

The way Rob Gogan sees it, the furniture and office equipment may not be always be reused the most efficiently, but at least it’s not ending up in a landfill.

Back at the parking lot, Jemma and her mother are walking by this dumpster that’s overflowing with metal rods and rusty poles. I ask Jemma what she sees there.

Jemma: A whole bunch of junk!

Jemma’s mother: Yeah. So you think they might recycle it?

Jemma’s mother: They’ll make something out of it. 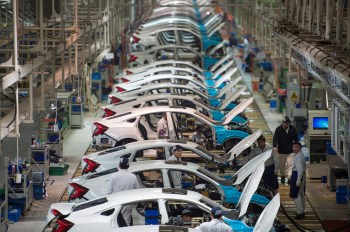 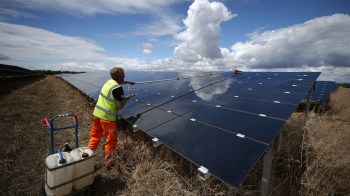