A shortage of funds for bridge repair

A shortage of funds for bridge repair

Sea Stachura Looks like high gas prices are getting us out of our cars. A report out today from the Transportation Department found that over the past seven months, we’ve driven 40 billion fewer miles than we did last year.

Good news for Mother Earth, bad news for the federal government. See, the less gas we buy, the less we pay in federal fuel taxes. Those go to finance highway and mass-transit projects. Now, the Highway Trust Fund could be in for a $5 billion shortfall. And that news comes at a time when a quarter of this country’s bridges are in dire need of repair. From Minnesota Public Radio, Sea Stachura reports.

Sea Stachura: The American Association of State Highway and Transportation Officials reports that states will need at least $140 billion to repair old, crumbling, and narrow bridges.

The organization’s executive director, John Horsely, says the states don’t have that money. Congress might chip in a billion dollars, but Horsely says it’s not enough.

John Horsely: Looking at the bigger picture, unless Congress generates substantial additional revenues, the Highway Trust Fund will become insolvent and Congress will have no choice but to dramatically cut back on investment.

That means no money to rebuild bridges. And forget new technologies like sonar that could identify stresses before bridges break. 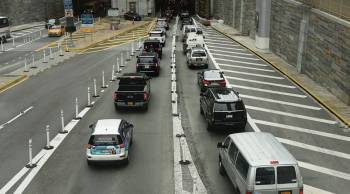