Scott Jagow: The high cost of feeding cattle is becoming a pretty steep burden for meat producers. That’s why the Ag Department wants to allow grazing and hay production on farmland set aside for conservation.

Of course, environmental groups are saying hold on a second. A federal judge in Seattle will hear arguments about that today.

The National Wildlife Federation says grouse could be hurt by an emergency program to allow grazing and hay production on CRP land. The Federation’s Duane Hovorka says that’s why his group sued the USDA.

Duane Hovorka: They need to do an environmental impact statement so they understand what the impacts of that decision are on 24 million acres of land across the country.

Danielle Quist at the American Farm Bureau Federation says cattle farmers will be the real victims if the injunction against the feed plan continues.

Danielle Quist: Commodity prices for feed are at an all-time high, hay is scarce and people need a little bit of assistance.

Under the USDA plan, ranchers would keep collecting subsidies in addition to any payoff from producing hay or allowing grazing. 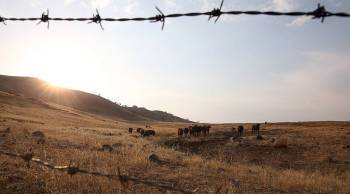