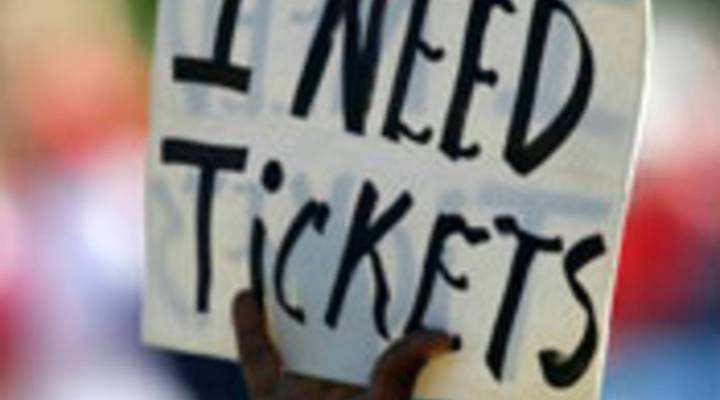 Are scalpers a dying breed?

Are scalpers a dying breed?

Kai Ryssdal: Baseball’s All-Star game is tonight in Yankee Stadium, the last year for The House that Ruth built. The Yankees will open next season in a billion dollar replacement right next door. That nostalgia might help explain why tonight’s game is sold out. But if you’re desperate for a way in, you could try StubHub. It’s the Web’s biggest seller in what’s called the secondary ticket market. Five million tickets sold last year; double that this year. Sadly, the cheapest ticket to the game tonight is $464. You could try something more old fashioned: find a scalper out on the street. But Marketplace’s Nancy Farghalli reports they, too, are facing a curtain call.

Nancy Farghalli: Wes works outside Dodger Stadium in Los Angeles. Today it’s hot, real hot. More than 95 degrees. Sweat drips down his face. He cools off under a tree. And watches police cars drive by.

Wes: They think we scums. Anytime you go to jail for selling tickets, there’s murderers, there’s rapists and you just got a ticket scalping.

For 20 years, Wes has been at almost every Dodgers home game buying tickets and then selling them.

Wes: You hustling to get your money back. So, that’s hustling, right?

Wes didn’t want to give his full name. He’s here with another guy who goes by the name X. Both are about to break state and county codes against scalping.

Wes: If you sell me your extra tickets that I buy is that illegal? I don’t think so. I paid the cash.

Today, both are buyers. They don’t have inventory to sell. X holds a cardboard sign, which he folds in half when he sees a police car. One side says, “I need tickets.” A Mercedes stops. The window rolls down. X leans into the air-conditioned car. The passenger wants to sell.

Passenger: Two really good ones and a parking pass.

X: What do you want?

Now X has tickets to sell.

And X says on a good night, he used to earn $300. Almost a thousand bucks for a three-game series. Now, he says customers have disappeared. That’s because guys like Wes and X face more competition.

X: StubHub they’re going to make their money regardless. We are just in the middle. We don’t want it all.

StubHub is also in the middle between buyers and sellers. The online site allows ticket holders to legally list their unused tickets. Once the ticket is sold, the company charges a fee to the buyer and seller. Wes says he’s trying to co-exist.

Wes: I don’t have nothing against them. You think I’ve couple of million right now sitting here on this curb. OK. I’m getting my shoes dirty.

Man: Do you have two tickets for tonight’s game?

The StubHub tent is near will call. There’s shade, a laptop to check ticket sales and employees who pass out orders.

SubHub Salesman: You are all set, enjoy the game.

Brian Bone: Before they had all the scanners and everything else, and nowadays with scanner. But I think it would be too risky to shell out a couple hundred dollars for tickets with possibility of not being able to go in.

As for Wes, he says street scalpers don’t intentionally sell bogus tickets. But he says buyers should exercise common sense.

Wes: Look at it and look who are they buying it from. You can’t just buy the ticket from anyone.

And what about using the tickets if they don’t sell? Wes never goes inside.