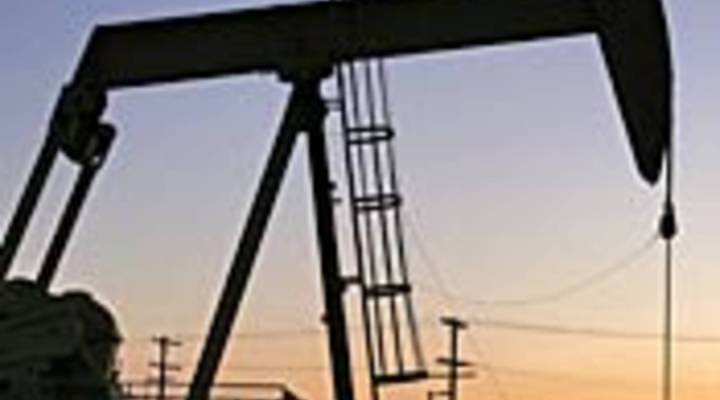 Tess Vigeland: Here’s a headline from a recent Los Angeles Times article that kind of took our breath away: “Envisioning a world of $200-a-barrel oil.”

It went on to talk about a spike in personal and business bankruptcies, a significant drop in American spending power, strains on public transit systems… It’s a scary picture.

So we wanted to put the scenario to someone who watches the oil market day in and day out. Tom Kloza is an analyst with the Oil Price Information Service.

I have to ask: Is $200 for a barrel of oil really a possibility in the near future?

Tom Kloza: You know, it’s possible, but it would probably be an occurrence that would be reminiscent of sort of the NASDAQ 5000. In other words, it would represent excess and it would represent an excess that is not likely to stick around for a while.

Vigeland: I have to ask you as someone who watches this on a regular basis, would you have said that also about $100-a-barrel oil?

Kloza: I probably would have said that about a year ago about $100-a-barrel oil, which is to say that I think that the prices that we’ve seen so far in 2008 represent excessive sentiment and irrational exuberance, I would say.

Vigeland: Have you ever seen such a really fast rise in the price of oil before? What really is behind this?

Kloza: Well, you know, one can talk about things like vehicle usage and industry and economic growth, but when you distill it all, the two biggest drivers and the two greatest fundamentals of all are money and fear. You have a flood of money which is exiting from normal asset classes like equities and bonds and to some extent real estate and it is flooding into all commodities in general, but very specifically into crude oil, which has become sort of a proxy for inflation. Now there’s this fear that we’ve reached a point where demand is going to exceed supply, largely because of emerging countries like China and India and this voracious appetite that the investment community seems to be attributing to those developing countries.

Vigeland: If oil does hit that $200-a-barrel mark, what does that mean for the average person, aside from the fact that we could be paying, what? $7-8 dollars a gallon at the pump?

Kloza: I think for the average person, it means that we’re talking about economic ruins. It clearly has a huge, huge impact on many, many hundreds of millions of people. This month, even with average gasoline prices of about $4.09 a gallon, we’re going to spend over $50 billion this month and if you were to project that over six months, we’ve got a $300 billion bill that is staring us directly in the face for the last six months of 2008.

Vigeland: Just to fill up our cars?

Kloza: Yeah, and you can compare that — that’s just gasoline — you could compare that to, let’s say, 2003, where we paid $17 billion or less each month.

Vigeland: Is there a point where we all will really have to change the way we think about things like commuting or grocery store multiple times a week. Will $200 be that tipping point or will we perhaps get there sooner?

Kloza: I think we’re there. I think we’re there where we’re tipping behavior quite significantly and its tipping despite really no leadership or any prodding from either political party right now. The problem right now is that a lot of the people who have investments riding on strong oil prices tend to dismiss this as largely a U.S. event and they’ll say that, well, the United States is paying $4.10 on average for gasoline or even $4.60 on the West Coast, but many parts of the world pay $6 and $7 and don’t really complain about it. The difference is that 60 to 70 percent of those prices paid in some of those overseas countries go back for taxes to fund various programs. Ours is really all being exported offshore or basically into the pockets of the investors who are profiting from the higher prices.

Vigeland: And I would guess that another argument would be that we don’t necessarily have the public transportation infrastructure that, say, Europe does where you have options.

Kloza: Right, we don’t have the options. You know, one wonders if in the next few years or certainly this decade there’ll cities planned that have something like the Disney monorail or something that looked like science fiction years ago or even in some of the cities like Philadelphia where they’re having the experiments with the sort of rent a very green vehicle so that one doesn’t have to own it and can share it. I expect more of this, although it could get short-circuited if we get that crash in oil prices, which through most of the years does follow some of these spikes that are questionable in nature.

Vigeland: Tom Kloza is the chief oil analyst for the Oil Price Information Service and not a whole lot of good news, but thanks so much for joining us anyway.

Kloza: Thanks Tess. I’m glad I’m not a motivational speaker.