The dream of Dubai

The dream of Dubai

Tess Vigeland: Everything in Dubai is about being the biggest, the best, the record-breaking-est. Perhaps you’ve heard about the indoor ski resort? The world’s tallest building? A giant map of the world made out of artificial islands?

Dubai is billing itself as a place where dreams come true. The pitch is working. Every year, tens of thousands of people come to Dubai to be part of the dream, to live and work there.

But can the desert paradise make good on its promises or are people in for rude awakening when they arrive?

As Sean Cole tells us, depends on who you ask.

Sean Cole: A map of the world made out of islands is nothing. That thing was finished back in January — or the first phase of it anyway — and nine days later, the state-owned company that built it, Nakheel, unveiled its latest project at an annual tourism conference:

[Clip from promotional film:] Nakheel brought you the world. Now, we take you to the universe…

Robert Lee: You know being in real estate, there certain moments in life you come to a place and you’re saying “Wow!” and Dubai is certainly a place of wows.

Robert Lee is the executive director of Nakheel. He’s also really representative of the new Dubai: a Korean guy who grew up in Canada and landed a senior position at a government company.

Lee: Dubai has been a desert place. There is no natural monument. Dubai doesn’t have Grand Canyon. The value we have with the world islands, it’s not the real estate; it’s how people talk about Dubai.

But some people who’ve move here will tell you that the villas and the dream are pretty shoddy.

People like Jan Robertson, a housewife from the UK. She’s had a lot of trouble with her house:

Jan Robertson: The quality’s really poor, yeah; water pouring in when it rains. What’s the things on the roof? The water tanks. They burst on a regular basis, every three or four months.

I talked with Jan at a country club where she has breakfast with friends every Wednesday. They’re mainly the wives of guys in the oil, construction and financial industries, Brits and Americans alike. They talk and laugh and sometimes complain, and the day I was there, Jan and her friend Heather Johnson complained that the dream of Dubai is just something their husbands’ companies told them so they’d move there.

Heather Johnson: They do like a wine and dine: “Bring wife out on us, you know? We’ll take her out and we’ll show her a good time,” and so the wives come and go “Wow, this place is great; we’re moving tomorrow!” and then you get here and you live here and reality sets in and you go “Oh.” It’s expensive here. It’s expensive to go out, it’s expensive…

Plus, their husbands have to work six days a week. There’s no genuine culture here, Jan says. The British school her kids are in is good, but she’s paying a lot for that too.

Cole: So you don’t think the dream of Dubai matches with the reality of Dubai?

Robertson: No. No, I don’t at all. Not once you actually live here.

Nonetheless, people are climbing all over each other to live here. A report from the Dubai financial group Shuaa Capital says that the population of this city grew more than 50 percent between 2000 and 2005 and one of the reasons it gave was pretty simple — almost sweet. It said people just like the Dubai story.

Ranya Afifi: They love it, they love it. It was a desert and they made something of this desert…

Afifi: …there are trees in the desert! They managed to bring down the temperatures here by 10 degrees Celsius — that’s incredible. Any architect who has a really funky idea can come here and realize his dream. They motivate you. Why not love the story?

Cole: It sounds like you really love the story.

And because so many people want to be a part of the story, the property market is through the roof, which has led to another aspect of the dream: you can make a lot of money here flipping apartments or renting them out.

Unfortunately, developers can’t keep up with demand and most of the residential projects in Dubai were delayed last year, including a Nakheel building that this woman invested in. She didn’t want her name used.

Investor: There was no compensation. It was a year late.

Investor: Well I think you don’t like to ruffle too many feathers, because we are guests of this country. You’ve got to be a little bit careful.

Cole: What could happen; they could toss you out?

Lee: We probably have the largest customer relations center.

Lee: And we treat everybody on the same basis. So, please come and ruffle feathers. And on the flip side, you should have asked her how much she has made in capital appreciation from our building. That should answer the question.

Actually, we did talk about that:

Cole: So the problems are outweighed by the benefit?

Investor: Yes, for the moment, but you’ve got to watch the bits in the middle because they could out grow their popularity, then.

But for now, Dubai is the most popular kid on the block — and not just among expats who have money.

There’s a whole other Dubai dream that we haven’t mentioned yet. One that has more to do with survival. Hundreds of thousands of the foreigners in Dubai are here to build the luxury apartments and villas and islands shaped like stuff. They’re the South Asian laborers who are literally hammering the city’s promise of prosperity together.

For them, the dream of Dubai is just making a little money to send back home — and it is very little.

Robertson: That’s one of the things that really gets me down about Dubai.

This is Jan Robertson again.

Robertson: And you see bus-fulls of them, their empty eyes? It sounds strange. You just look at their eyes. they’re just empty. Sad, really sad, but that’s how Dubai’s being built, yeah? That’s what they rely on.

And it’ll probably be that way until Dubai has to adjust its boomtown mentality into something more sustainable; something more realistic and less like a dream. 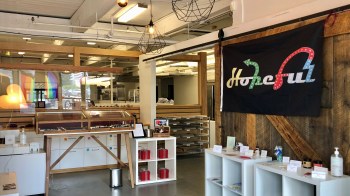