Gates steps down from Microsoft

Gates steps down from Microsoft

Scott Jagow: In a few days, one of the world’s wealthiest people will be out of a full-time job. Bill Gates is stepping down as chairman of Microsoft so he can devote more time to his foundation. Whatever you think of Gates, you can’t deny his influence on world — and the world of technology. Janet Babin reports from our Innovations Desk at North Carolina Public Radio.

Janet Babin: Back in the day, Information Week editor David Berlind routinely interviewed Bill Gates. What struck him most about Microsoft’s leader was his intensity.

David Berlind: I can remember sitting in a room with him, having a very impassioned argument about software development.

Gates may have mellowed with success. But Berlind says the billionaire leaves behind a corporate structure many cyber companies still use today — that is, the tech geek should lead the company.

Berlind says Gates knew his stuff from the start:

Berlind: You couldn’t come to him with a technology idea, or show him some code and fool him about it. He knew the bits and bytes deeply enough to know what was real, what was good, what was cool and what had potential.

Microsoft faces many challenges these days. But Berlind says the company’s prepared to weather them without Gates at the helm. 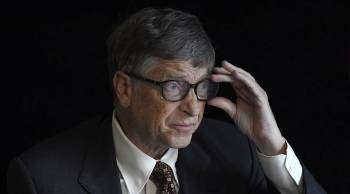