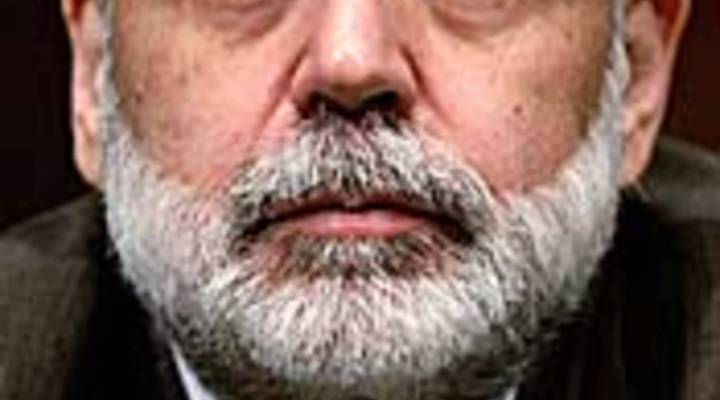 The Fed’s roadmap to stability

The Fed’s roadmap to stability

Tess Vigeland: Federal Reserve policymakers meet this week to talk interest rates — wouldn’t want to be in that room.

Let’s see, is the priority inflation or is it propping up a slumped economy or do we need to rescue more banks so they start lending money again? Raise rates or keep ’em steady?

It’s all on the table and here to parse the issues with us is Richard Sylla. He teaches economics at the New York University Stearn School of Business.

Richard Sylla: Glad to be here.

Vigeland: You know, the Fed is fighting all kinds of fronts here. You’ve got the weak economy, rising inflation at the same time with oil and food going through the roof and then you’ve got banking institutions that aren’t willing to lend out money to anybody anymore. This really puts the Fed between a rock and a hard place and something else, doesn’t it?

Sylla: Well sure. The Fed is supposed to keep low inflation, keep a healthy economy, look after the health of the financial system and right now, we’re having slow growth, the recession hasn’t been announced but some people think we’re in it, there’s a lot of worries about inflation and we know that many of our financial institutions are wounded, so nothing is going quite right as far as the Fed is concerned right now.

Vigeland: So what is the most important thing for the Fed to focus on as it meets this week?

Sylla: The real problem that’s confronting us is the health of the financial system and there’s still some major problems out there. They suffered a lot of losses which has impaired their capital and that means the banks, in some sense, are riskier; they don’t have much of their own money in the game, they have all of our money. The Fed is encouraging themselves to recapitalize themselves and one way to do that is to go and find some rich people in the world, maybe in the oil producing countries, China where there’s a lot of surplus cash these days. And the attraction for these investors is that they get to buy the stock in the banks for lower prices than it’s selling for in the market.

Vigeland: And we’ve certainly started to see that already.

Sylla: Yes, that has happened already, but it may happen more as more banking institutions get into trouble. And this is going to take probably a year or two or three. That’s what we saw in the early 1990s. I think the banks, from their low point in 1990, they weren’t really happy to lend freely again until almost the mid-1990s. But this is why I think that although I worry about inflation, I think the real problem is to get the financial system back to health and then the Fed can really focus on inflation.

Vigeland: And if it doesn’t then I presume we’ll continue to see a lot of cheap lending come out of the Fed for those very banks.

Sylla: Well, I think that’s right. That’s the way the Fed has been fighting the problem so far. It’s been creating a lot of credit facilities, lending securities, increasing its purchases of government securities, trying to make the economy more liquid when there are a lot of illiquid financial assets out there that the banks not only have trouble selling to anyone, but they can’t really figure out quite how valuable they are.

Vigeland: And would you predict also that we might see some more takeovers like that of Bear Stearns?

Sylla: I think that’s one of the techniques the government uses now when a financial institution really can’t hack it, maybe because it can’t raise that capital, what the Fed and the FDIC and other financial regulators do is they try to get it to be merged into or absorbed by a healthier financial institution and I expect we’re going to see quite a bit of that in the next few months.

Vigeland: Well, Professor Richard Sylla, thank you for helping us out today.

Vigeland: Richard Sylla is a financial historian at the New York University Stearn School of Business.