Enough success to fill an arena

Enough success to fill an arena

Renita Jablonski: Americans know how to rock. Maybe that’s what helped shake up the former Millenium Dome in London. The music venue is now under the control of an American entrepreneur. It’s gone from a financial and political disaster to a success known as the “02.” From London, Stephen Beard reports.

Stephen Beard: Remember the Dome? A billion-dollar tent on the south bank of the Thames. A vast glass fiber canopy erected by the British government to mark the arrival of the new Millenium.

This was going to be a new kind of exhibition center, full of fun and innovation, a showcase for the talent and energy of Britain. But the people stayed away in droves.

Stephen Bayley: The contents of the Dome were poorly conceived, badly managed, artlessly executed and subject to political interference at every stage. And it shows the government’s contempt for ordinary people.

The government got rid of the Dome. It’s now under new management, and at a cost $300 million, the white elephant has been reborn as a state of the art arena.

David Campbell: We’ve just been voted best new venue in the world, best international venue, and we seem to be winning an award about every week. So it’s doing extremely well.

Artists like Prince, Led Zeppelin and the Eagles have since played here to capacity crowds.
The Brits shunned the Dome. Now, they line up around the block to get into the O2.

Brit 1: I love it. I’m really glad that they’re doing good things with it now.

Brit 2: I really think they’ve done a great job on this place, and it’s brilliant.

Brit 3: Quite keen to see what it’s like to come here for a concert.

So why has an American company succeeded when the British government failed so abysmally?

Campbell: We are in the entertainment game. We’ve no aspiration to be in government. People should stick to what they do well.

Campbell: I am. I am saying the government can’t organize a music venue.

At the O2 in London, this is Stephen Beard for Marketplace.

What’s the mood in London after the Brexit vote? 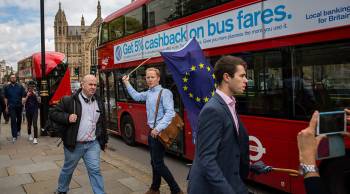