Obama says no to public financing

Obama says no to public financing

Bob Moon: When anybody turns down $80 million, it’s going to be news, but especially when it’s a candidate for the highest office in the land.

Barack Obama announced today he won’t accept any federal money for this year’s presidential election. There’s a strategy at play here: The move frees the Obama campaign to spend as much money as he can raise.

But as Marketplace’s Steve Henn reports, the decision is drawing some fire.

Steve Henn: Barack Obama is the first presidential candidate since Watergate to turn down public money for a general election.

David Arkush: It’s not altogether surprising when someone is raising as much money as he is and breaking fundraising records that he would opt out of the public funding system, but it is very disappointing.

The McCain campaign accused Obama of breaking his word. But Obama said the public financing system is broken. He wants to be armed with enough money to fight what outside groups throw at him. His army of small donors have given him that ammunition.

Obama: We built a grassroots movement of over 1.5 million Americans. We won the Democratic nomination by relying on ordinary people…

If Obama accepted federal funds, he’d have to limit his spending to just over $84 million this fall and stop collecting private contributions. But Obama’s already raised more than three times that amount.

David Arkush says lots of that money has come from wealthy insiders.

According to the Center for Responsive Politics, 55 percent of Obama’s cash comes from so-called big donors, folks who have given at least $200.

Julie Presley is one of them.

Julie Presley: No, I don’t feel like a big donor. If you knew what my salary was, you would… I don’t make a lot of money.

Presley, a social worker, has never given more than $25 dollars at a time, but she’s given again and again and somehow, she doubts, if elected, that Obama would offer her any special favors. 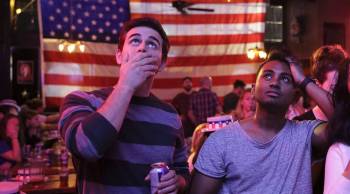