FBI cracks down on mortgage industry

FBI cracks down on mortgage industry

Roughly 400 real estate industry participants have been indicted since March as part of an investigation dubbed Operation Malicious Mortgage.

On Capitol Hill, legislation aimed at helping homeowners avoid foreclosure has hit a couple of snags. First, the White House warned that President Bush will veto the rescue plan as it now stands and a group of Republicans is trying to block the bill taken up by the Senate today. They argue it’s nothing but a bailout for mortgage lenders, one of which is accused of giving two Democratic senators favorable loans.

Tom Coburn: It’s really a question of should the government be subsidizing and incentivising bad behavior on the part of the loanmakers.

Coburn has joined a group of Republicans asking that the bill be set aside in the wake of allegations that the sponsor, Christopher Dodd of Connecticut, is one of two senators who received a favorable interest rate from the nation’s largest mortgage lender, Countrywide Financial.

But with new foreclosures averaging 9,000 a day, many Republicans support the rescue plan, especially those from hard-hit states like Senator Mel Martinez of Florida.

Mel Martinez: Fact of the matter is this is program geared to help individuals. We shouldn’t get distracted with side issues.

The congressional timetable of having a bill on the President’s desk by July 4 was thrown in doubt by today’s White House veto threat. 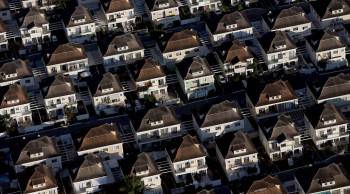 Home building’s up, but mortgage costs could go up too