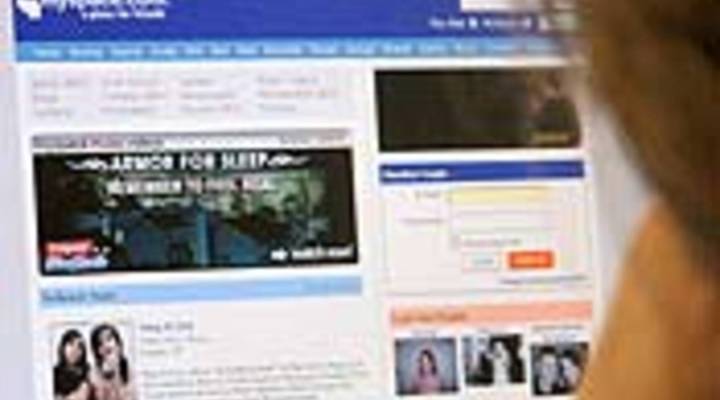 MySpace looks for an older crowd

MySpace looks for an older crowd

KAI RYSSDAL: There are big doings in the social networking world. MySpace — that’s the one owned by Rupert Murdoch’s News Corp — has a lot less, well, space to itself these days. Just a year ago the site brought in nearly three times as many visitors as its rival Facebook — that’s the one that Microsoft owns a tiny piece of. We learned this week the two are just about even — 115 million visitors a month. Which probably explains why MySpace is getting ready to unveil a big makeover. Stacey Vanek-Smith reports.

Stacey Vanek-Smith: Twenty-six-year old student Peggy Robinson has had a MySpace page for about four years, but she doesn’t use it much anymore. She recently opened a Facebook account and says it’s much easier to casually communicate on that site and announce news, like her grades last semester.

PEGGY ROBINSON: I posted to my Facebook account, “Peggy Robinson got straight A’s. Woo-hoo!” And got lots of congratulatory responses from friends. And so I would say that Facebook is definitely much more of a community builder than MySpace.

That ease of communication is a lot of what’s giving Facebook an edge, says Yankee Group Analyst Jennifer Simpson.

Jennifer Simpson: When we survey the public about social networks, they say that the number one reason they’re going online is to meet people that they actually know.

Simpson says Facebook has also attracted an older demographic. MySpace is trying to do the same. It’s launching a sleek redesign next week that’s supposed to appeal to older users. Why? Because advertisers want them, says industry analyst Rob Enderle.

Rob Enderle: MySpace was focused on kids and did a good job with that. It’s just that very often where the money is, is with folks that are actually earning it.

The new MySpace will be cleaner. Fewer hip videos, more news stories. And the site will include more advertising options. Social networking sites still haven’t figured out how to cash in on their millions of users. The Yankee Group’s Simpson says there’s no time to waste.

SIMPSON: The next year will prove to be fairly critical in terms of whether these companies can double their current revenues or exceed those expectations. We’ll see.

There are some serious expectations. Facebook is currently valued at $15 billion and NewsCorp. paid a half billion for MySpace three years ago. But profits so far have been unimpressive.