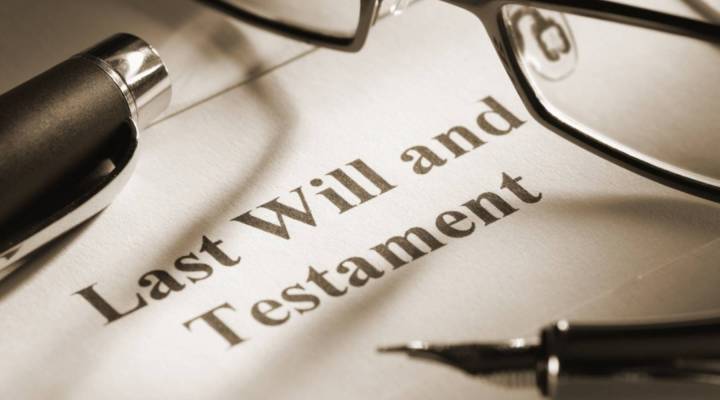 Not Quite Six Feet Under

Do you need a will?

COPY
iStockPhoto
Not Quite Six Feet Under

Do you need a will?

Tess Vigeland: And so let’s move to the practicalities. Wills. Trusts. Power of attorney.

Joining us now and over the next few weeks is John Ventura. He’s the author of “Kiplinger’s Estate Planning” and John, let me ask maybe an obvious question and Zelda dealt with it a little bit: Why do so many people simply not this about this?

John Ventura: You’re right, Tess. You know, the studies that I have seen say that 55 percent of the American public doesn’t have the basic estate planning tool which is the will. There’s a couple of things that are happening. One is, I think, a psychological thing: People feel like they’re too young to even deal with these kinds of issues. You’re dealing with the end of your time. You have to think about the people that you’re going to give things to and all of those are very serious things. So I think there’s a reluctance to deal with it psychologically and that’s why a lot of people don’t

Vigeland: So people certainly don’t want to face their mortality, but I wonder if also there might be some conventional wisdom out there that wills are only for people with a lot of money?

Ventura: Yes. It’s surprising because there are things even for people that have very few assets where a will can be very important to them. Say a person doesn’t have a lot of assets, but say they have an automobile. One of the problems that an heir would have in dealing with that automobile is getting the automobile’s title placed in their name and the probate process allows you to do that. So if you have a will then you can get that title transferred more easily. The other issue is if you have minor children. Even if you don’t have a lot of assets, it’s almost essential that you have a will because if you don’t, there are two aspects of care for them that are going to be ignored. One is by a will you’re going to be able to name the guardian that’s going to take care of those children and you also may be naming the guardian that’s going to be taking care of the property that you may leave to help those children and that may be two different people and if you don’t have those people named then the court is going to appoint someone and it may be someone that you may not like or want to raise your children.

Vigeland: What happens if you die without a will? What’s the process?

Ventura: It’s called dying intestate. Basically what happens is any property that belongs to you and you die without a will, if you have a spouse and no children, everything goes to the wife. However, if you have a wife and you have children then part of the money goes to your wife and also part of the money goes to your children. What if you have children from several different marriages? They may all have a claim in this and if you die without a will, you may find that all these different parties end up fighting with each other over who’s going to get what.

Vigeland: At what point in your life do you need to start considering the idea of a will? I mean, if you’re in your 20s, you’re single, it’s just you, do you need to bother with it?

Ventura: I think so. You know, nowadays a lot of people are starting their careers right out of college, they’re going to start to build wealth. They’re going to, within a matter of a few years probably, buy a property, buy a home, a condo, and you still want to have the right to make the decision who’s going to get these things, so the earlier you can start dealing with that, the better.

Vigeland: Once you get married, if you do not have children yet and most states will automatically give your estate to your spouse, do you still need a will?

Ventura: I think you do need a will. I’ll give you an example, a famous example of this: Clark Gable, famous movie star in the old days, had a will. At the time that he created this will it was just his wife and he, so he left in the will everything to his wife and in that will he specifically said “I have no heirs, no children, so everything is going to go to my wife.” Now, unfortunately, he didn’t update that and his wife got pregnant. He did a movie called “The Misfits,” which many people think was such a physical movie that it exhausted him and he ended up dying in a situation where he didn’t put anything in there about that child and he should have been updating it all the time.

Vigeland: So what happened?

Ventura: If his wife had not survived him, if they had died together — say it was an accident or something like that — the court would have decided who was going to raise that child and who was going to be the person that was going to manage the wealth, the money, that Clark Gable has built over his movie career for the benefit of the child.

Vigeland: Alright. Well, later in the show, we’ll be talking with John about exactly what you need to do to get a will done. Thanks so much John.

Vigeland: And join us next week for an expanded look at living trusts.