Kai Ryssdal: Tomato growers in Florida got the all clear from the Food and Drug Administration today. The FDA said the Sunshine State’s $40-million tomato crop can go to market even as the government’s trying to track down the cause of what is now a 17-state salmonella outbreak.

Meanwhile, the Bush administration has asked Congress to boost next year’s budget for the agency an extra $275 million, most of which would go to protecting the food supply.

John Dimsdale: The Bush Administration unveiled a strategy for beefing up the FDA last November, but didn’t ask for funding. Now, it is.

With the money, the FDA would hire nearly 500 new inspectors and set up offices in Asia and Latin America where food destined for U.S. kitchens can be checked before it’s shipped here. The administration is also calling for the FDA to certify third-party inspectors to supplement the work of government employees. This budget request follows numerous recalls of contaminated vegetables, pet food, even toothpaste.

Michael Taylor: We’ve got a system that’s been in trouble for a long time and it needs to be rebuilt.

Michael Taylor is a former deputy commissioner at the FDA and now teaches at George Washington University. He calls the $275 million for next year a step in the right direction, but only a step.

He supports efforts by a group of senators to add that much immediately to this year’s budget to start restoring faith in the nation’s food supply.

Taylor: And that’s part of the real shame here. We don’t want people to stop eating tomatoes or leafy green vegetables, but questions about the safety of the product, loss of confidence in the safety of the food and in the government oversight, is very much a deterrent for people making healthy food choices.

Lax oversight, he says, is also closing U.S. export markets. The European Union limits U.S. chicken sales over health concerns, and South Korean anxiety over mad cow-tainted beef from the U.S. has spawned huge protests that threaten to bring down the government. 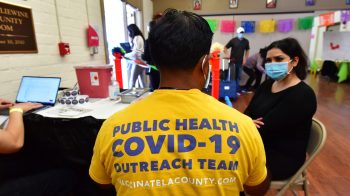 What happens once federal funding to fight COVID ends?