Spelling success across the globe

Spelling success across the globe

Scott Jagow: Last year, the winning word was Serrefine.
S-e-r-r-e-f-i-n-e. It’s a blood vessel clamp. Today, the finals of the Scripps National Spelling Bee get underway in Washington. This year, a record 288 spellers are participating.
The Spelling Bee has become quite the international business. John Dimsdale has more from Washington.

John Dimsdale: Thanks to an Oscar-nominated documentary, a best selling novel, a hit Broadway musical and a feature-length movie, spelling bees are hip. And not just in the U.S.

Paige Kimble: We have inquiries from China and Taiwan and South Korea and Malaysia.

The director of the National Spelling Bee, Paige Kimble says there 22 two non-native English speakers among this year’s finalists, competing for a $40,000 first place prize. That includes students from Ghana and South Korea.

Kimble: The ultimate mark of having mastered the English language is to be able to say you’re a champion speller. So they want to demonstrate their mastery by participating in spelling bees.

For the third year in a row, the ABC television network will broadcast Friday’s final competition live. And for the international audience, ESPN360.com, will stream today’s quarterfinals live on their website. 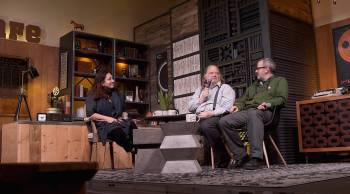