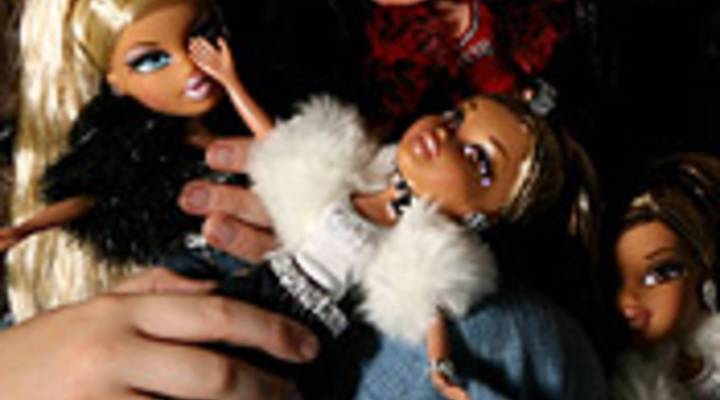 Barbie in a Bratz fight

Barbie in a Bratz fight

Scott Jagow: In this corner, weighing 46 kilograms, wearing something from her fashion model collection, the one, the only, Barbie. And in this corner, weighing in at 45 kilograms and looking dazzling in sequins, the challenger, the newcomer, Bratz. Today, the company that makes Barbie takes its rival to court. Stacey Vanek-Smith tells us what’s at stake.

Stacey Vanek-Smith: Petite maybe, but Barbie has been the 800-pound gorilla of the doll industry for about 50 years. The plastic princess is worth an estimated $1.25 billion.

Richard Gottlieb: Barbie was so unchallenged that it was considered impossible to take it on.

That’s toy industry consultant Richard Gottlieb. He says the phenomenal success of Bratz, which debuted in 2001, was a major coup.

Bratz song: Move over queen, we’re on the throne.

But Mattel claims Bratz’ creator was working for Mattel when he came up with the multi-ethnic, belly-flashing rebel chicks. Original sketches of Bratz are being forensically tested to see when they were drawn.

Why would Mattel go to all this trouble when Barbie sales are more than double Bratz? Again, Gottlieb.

Gottlieb: Both Bratz and Barbie have been really struggling the last two years. If you’re losing marketshare in a shrinking market, that’s not good.

Barbie’s already tried to take back its turf with Barbie Flavas. Sinking its fingernails into Bratz would put the rivalry to rest.