After aid comes uncertainty in China

After aid comes uncertainty in China

Scott Jagow: In China, the stock market had a moment of silence today for victims of last week’s earthquake. The death toll could reach 50,000, the Chinese government says.

Reporter Jamila Trindle joins us now from the earthquake zone. Jamila, what’s happening to the people who have survived this?

Jamila Trindle: Well, there are a couple official shelters that have been set up in stadiums and schools, and they’re being given food and people have set up places where they can make free phone calls. But in addition to that, just driving around you see all these tents set up everywhere. So there’s a lot of different ways that people are coping for now, but it’s unclear what the next step will be from them.

Jagow: And what about the aid that is coming in from the government, and I also understand from the people of China?

Trindle: There’s been a large outpouring of concern, of course, and aid, and volunteers have been arriving, sometimes too many and too disorganized, trying to get in to help. But there’s been a lot of aid from different companies. The government, they’re offering about $1.40 a day for people that have been affected and displaced by the quake. And so they’re really hoping that people will cycle through these large, you know, camps of 15 [thousand] to 30,000 people.

Jagow: China kind of stood still today with a moment of silence, and the stock market had a moment of silence and a lot of things were closed. But there’s going to be a process here of people getting back on their feet financially. Do we know anything about the plans for that happening?

Jagow: Jamila Trindle in China’s Schezwan province. Thank you for joining us. 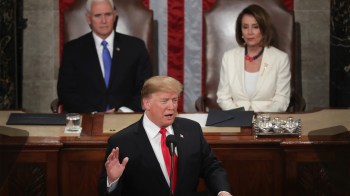