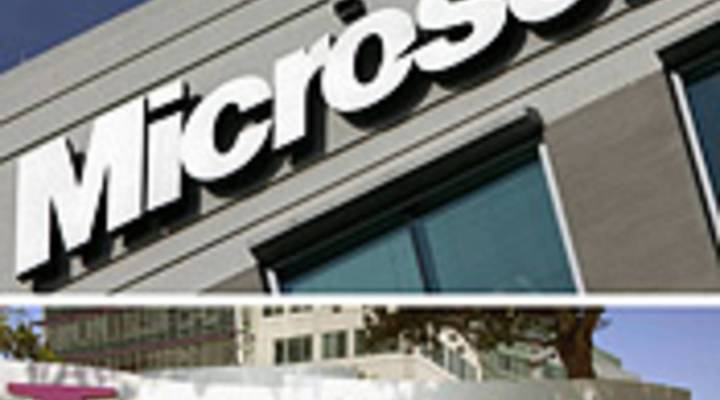 TESS VIGELAND: Four months of computer dating came to an end over the weekend. Microsoft finally gave up on wooing search engine Yahoo into a long-term relationship. The planet’s biggest software maker was willing to offer $33 a share for a company that was worth just over $19 a share before the merger bid, and today shareholders punished Yahoo with a 15 percent price drop. Ina Fried is here to explain. She’s with CNET News.com. What happened?

INA FRIED: Well, you know these two sides have been pretty far apart for a while now. There was a glimmer of hope late last week. The two sides wanted to talk some more. They did, and it turned out they just couldn’t get any closer.

VIGELAND: You know, this really all seems to have come down to price, and there are a lot of questions today about Jerry Yang, of Yahoo, and how he can back up a demand for $37 a share.

FRIED: It’s pretty tough, especially when shareholders themselves, you know some of the larger ones, were saying we would have taken 34 or 35. It’s a tough road that Yahoo’s staked out for themselves.

VIGELAND: Is this over at this point?

FRIED: It is for now. I mean, I think the one thing Yahoo was successful at was convincing Microsoft that if it went hostile, it would not be a pretty picture. You know, I think the question is, do Yahoo’s shareholders put significant pressure enough on Yahoo to push them back to the table.

VIGELAND: Alright, let’s do a quick review for both sides here. Why did Microsoft even need to go after Yahoo?

FRIED: There were two things that Microsoft was looking for. One, the engineering talent, but there are a few different ways they could have gotten that, the other is scale. They’re looking to take on Google for the long-term. They see this as a years long battle and they want to bulk up as much as they can, and Yahoo was the big other player that they could acquire, and there really aren’t a lot of other options to give themselves the kind of scale that Yahoo would have brought.

VIGELAND: What are the options at this point? I mean they’ve been talking about AOL for awhile. There’s MySpace and Facebook out there.

FRIED: Those are the big three that naturally come to mind. You know, with MySpace and Facebook, those are obviously huge audiences. It’s been a lot tougher for companies to monetize the kind of audience that you get with social networking, compared to what you get in search, or even general Web.

VIGELAND: Alright, and what about Yahoo? What happens next for them?

FRIED: Well, this is going to be some real defining time for them. I mean, the first step is they’ve got to convince shareholders that they have a plan. I think some of that’s going to come from, I mean, they’ve said they’re going to probably move ahead with this deal with Google, where some of their search advertising they outsource to Google. That could boost revenue in the short-term, but strategically could be a challenge for them. I mean, they’re giving away another piece that potentially could differentiate them. AOL tried a similar route, and it hasn’t, it has been financially OK, but, you know, has helped them kind of further become less relevant.

VIGELAND: Well, let me ask you one more question about Jerry Yang. What was really going on here, do you think? Did he just simply not want to sell Yahoo?

FRIED: I talked with a source close to the negotiations, and that’s exactly what they said, was their sense was that Jerry just didn’t want to sell, and I mean, don’t forget, Yahoo was not on the block. It was not shopping itself. Microsoft has been knocking for a couple of years now, so I think his negotiating stance reflected if we’re going to get bought, it’s going to be on our terms.

FRIED: They could. I mean there aren’t that many options, so I think the idea that this settles Yahoo’s future as independent once and for all, is a bit of a stretch.

VIGELAND: Ina Fried is a senior writer with C-Net News.com. Thanks for your time today.