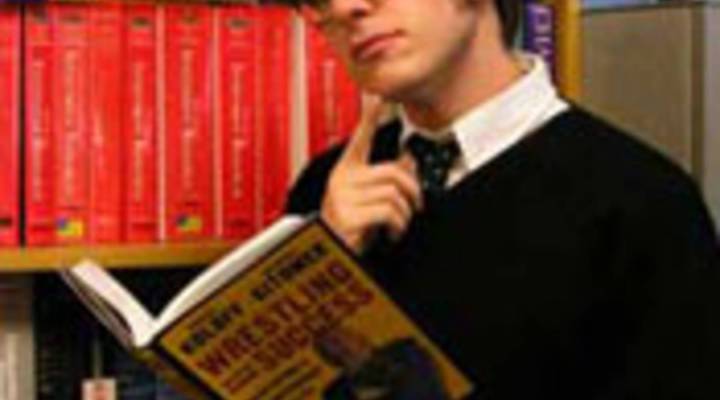 COPY
Rico Gagliano back in 2004, studying up for the first "Educating Rico" segment. Vince Winkel

Rico Gagliano back in 2004, studying up for the first "Educating Rico" segment. Vince Winkel
Listen Now

Rico Gagliano came to work with this show back in 2004 and over the past four years, he’s graced us with a monthly series called “Educating Rico,” wherein he learns the basics of personal finances.

We’ve listened to his triumphs and failures — paying special attention to the failures — but four years is the length of a college education and so it seems fitting that we are drawing the series to a close this week and Rico’s here to look back on his journey to moron to Ivy League graduate of the Marketplace Money School of Basic Finance.

Vigeland: You never really were a moron, were you?

Gagliano: Yeah, they went out on the street and they found a guy that was drooling and that was me. No, we decided to do this because it’s not the most exciting topic, you know, this sort of basic, bare bones finance

Vigeland: How dare you say that?

Gagliano: The basic bare bones stuff! It’s gets real exciting when you talk about hedge funds…

Gagliano: …where lives are at stake. Not so much “what is a mortgage?” and the idea was I would make this not-so-fun topic fun. The problem was that I didn’t know anything about any of it and so in Orwellian fashion, we decided to turn my ignorance into a strength. I think what is actually really interesting is how many people immediately understood what we were trying to do and totally sympathized. People who, like me, were actually older folks who really should have known more about personal finance and didn’t quite get it. I actually have a clip here I think illustrates why we do this. I was doing a piece about Roth IRAs and I decided to talk to a listener named Heather who had written to us:

Heather: Since I now have saved up enough for retirement, everywhere I look and everything I’ve heard, they told me to put it in a Roth IRA and every I heard was very simple. I went online, I tried to open up a Roth IRA and the problem became much, much more complicated than that.

Rico: It’s not what you think it is, right? I thought that it was just going to be kind of like a glorified savings account.

Heather: Yeah, I kind of pictured it like a CD that had a fixed interest rate or something like that and it just grew.

Rico: No, but it’s like there’s 10,000 different things that you can do with a Roth IRA. This is the thing, you know. Anytime you hear somebody say that something in personal finance is simple, I always think “you know, making rice is simple.”

Heather: I made rice last night and it got burnt.

Gagliano: You know what I’m saying?

Gagliano: Poor Heather, but poor many of us. I mean, she’s a bioengineering grad student, you know. This is not a dummy. We go through our lives and some of us just can’t pay as much attention to this as we should and it’s becoming more and more important.

Vigeland: So Rico, do you know what a Roth IRA is?

Vigeland: Well, you seem a little smarter for this experience. Do you feel like you’re better off financially in toto?

Gagliano: Generally speaking, yes, and especially in certain areas. The third one that I did was about student loans. This was back in 2004 or 2005 when interest rates were incredibly low and I did this piece and I was told by Janet Bodnar of Kiplinger’s Personal Finance to consolidate loans right away.

Rico: What if I, say, have a credit card that has a lower interest rate than my issuer offers — they’re out there; a 3.9 percent credit card or something.

Janet: Now Rico, do you have a credit card with a 3.99 percent rate?

Gagliano: OK, so you got it?

Gagliano: So I took Janet’s advice: consolidated, didn’t put it on that mythical low-rate credit card and I’ve got like a 3 percent rate on my federal student loans right now, which is the closest I, as a non-homeowner, can come to bragging about an incredibly great rate on something.

Vigeland: Well, I have to say you have broadcast many of your stupider financial moves over the years.

Gagliano: Uh, yeah. At some point I realized that that wasn’t doing me any favors as far as being a trusted voice of authority in other reporting, so you’ll actually notice as the series went on, I start focusing on other peoples’ mistakes as well — my friends, my family. Let’s just share the burden of responsibility here.

Gagliano: But, yeah, I think we got a lot of listener response to the episode in which I bought a used car, partially because I reenacted the car buying process with a young girl portraying me, but also I made a really bad mistake that I only realized after I brought the car home. Let’s listen to this:

Rico: Yeah, there is no defrost button. There is literally a hole in the dashboard where it should be. You’re laughing at me! I deserve it.

Vigeland: Yes, you did Rico.

Gagliano: Yes, I did. That was Alex Rosten of Edmunds.com by the way that I got to embarrass myself in front of, as well as the entire nation.

Vigeland: And so, now when you go looking at cars, you make sure that there is a rear defrost button?

Gagliano: Among many other things, that is something you should check for.

Vigeland: OK, and if you want to hear what else you should check for, we’ve got all of Rico’s pieces on our web site. Alright Rico, favorite moment as you graduate?

Gagliano: Yes, using my father, who has a great sense of humor — and an awesome radio voice, by the way — but he grew up under FDR when things were taken care of for you and now everyone’s on your own and you can save a million bucks for retirement and still be worried about being able to pay for health care and I think my dad really got across what that feels like:

Rico’s Dad: But anything catastrophic — and I certainly know people to whom this has happened — I could be wiped out.

Rico: You really think you could be wiped out?

Rico: All right, on a happier note, if I was able to tell you you’ll be able to afford it, what would be the thing you would most like to do in your retirement?

Rico’s Dad: Gee, I don’t really have any crazy things I’d want to do.

Rico’s Dad: Oh no! But that is because you were not a product of the depression, Rico. You came about in plush times.

Gagliano: He’s got a sense of humor about it, you know, and I think that’s hopefully something that people got out of this series is that personal finance is difficult, yes, sometimes the challenges are immense, but we can laugh at it and we can learn from it.

Vigeland: And have you learned from it?

Vigeland: Thanks so much Rico. Thanks for getting us all educated.

Vigeland: Speaking of education, this week Congress approved legislation to help college students who are having trouble getting loans. The Education Department can now buy up student loans from banks and it can provide money to state agencies that will then lend it to both students and the colleges themselves.