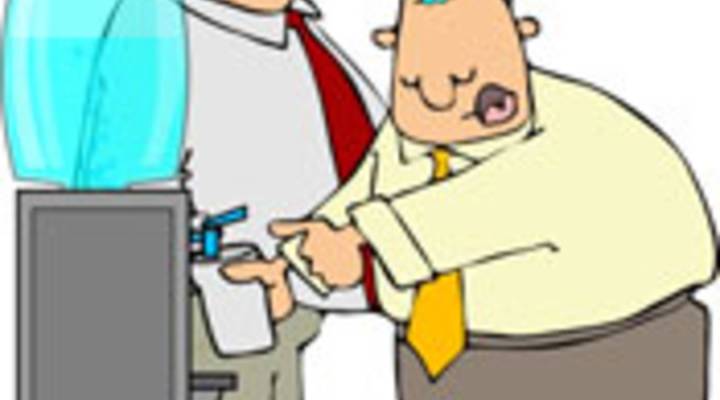 Banning gossip at the office

Banning gossip at the office

Scott Jagow: Would you like your job better if no one was allowed to gossip at your office? I’m asking, because one Chicago company has put a stop to it. Stacey Vanek-Smith has our story.

Stacey Vanek-Smith: Anyone who has ever camped out at the water cooler to get the latest, knows that office gossip is one of the great American pastimes. But, it’s all fun and games until it’s about you. Take the reaction of boss David Brent on the BBC’s The Office.

Characters from the show: They’ve given you a nickname.

Come on, what is it?

The villain from Popeye?

Don’t go out, they’ll know it’s me that told you.

To avoid these kinds of situations, Sam Chapman banned gossip at his company, Empower Public Relations. Three repeat offenders actually lost their jobs. After that, Chapman says, it was easy to get everybody to clam up.

Chapman claims gossip was interfering with productivity. That happens at a lot of offices says workplace consultant Sandra Crowe, author of “Since Strangling Isn’t an Option.”

Sandra Crowe: People feel like they can’t trust each other — You know, “This person’s talking about me.” Then morale usually slips.

Crowe: Whenever you ban something, people have a resentment. And so, what you often get are these retaliations that come up.

And what about the Big Brother aspect?

Crowe: It’s any employers right to expect that you treat each other professionally, and putting some more intelligible boundaries around what professional behavior is, is all that I’m doing.

Chapman says a ban on gossip also means addressing things people gossip about, like salaries. They’re transparent at his company. And if people aren’t allowed to talk behind your back, you’d better be available to talk face-to-face. So Chapman makes time to talk with workers about their concerns. As far as day-to-day enforcement, Chapman largely relies on employees to rat each other out. And when they do…

Chapman: I run, yell and tell, just like they tell kids at school. I invite the person who gossiped to go clean it up, and then I follow behind them and clean it up myself.

Chapman says teamwork has never been better. And Empower is landing bigger clients. And he can rest easier, too. Chapman says the ban began after he heard gossip about himself.