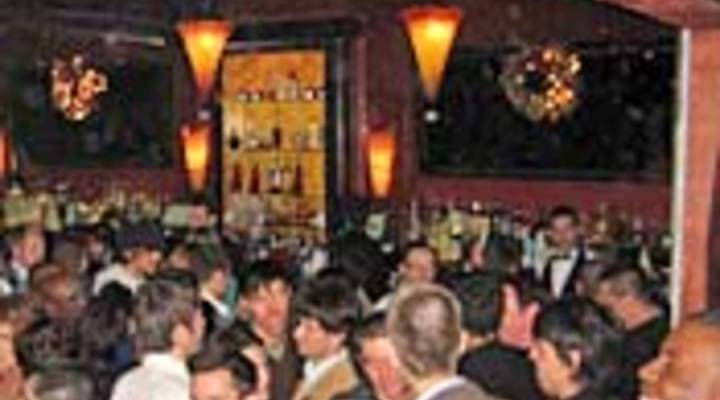 KAI RYSSDAL: At this point in the recession, or slowdown, or whatever you want to call it, you’re probably familiar with the term “business cycle.” Business and businesses have life cycles just like everything else. Demand creates new opportunities, and then when that demand dries up businesses die.

Every year, Fortune Magazine releases a list of 10 businesses it thinks are facing extinction. Some of this year’s casualties? Record stores, crop dusting and telemarketing. Oh, and gay bars, too. That one caught our eye because gay business in general is booming.

Jason Dottley: It’s an indication of open-mindedness. I think it’s a sign of progress.

But that progress has a left some older gay bars sounding like this . . . [sound of ocean waves crashing].

The Boom Boom Room opened in Laguna Beach in 1947. It used to be a favorite hangout of Rock Hudson’s. But today the windows of the white, art-deco facade are papered over.

Fred Karger: It’s a magical place. It had a little, kind of loungey bar, and it had pool tables. They’d have this wonderful cabaret show on Wednesday nights.

The new owner plans to tear down the Boom Boom Room and build a luxury hotel.

Gay bars all over the country have met similar fates: New York’s Roxy, The Avalon in Boston, The Pendulum in San Francisco. But here’s the weird thing: Gay business is booming. Gay spending power in the U.S. is worth an estimated $750 billion.

So why are gay bars having so much trouble? Marketing expert Jerry McHugh says part of it is generational.

McHugh: When I came out it was the early 90s, and it was really helpful to go to these places.

Boston Globe writer Robert David Sullivan says a few years ago he noticed the number of gay bars in Boston had been cut in half. He says it was strange because they had been such a cornerstone of the gay social scene.

Robert David Sullivan: It was sort of structured that you could meet people that way, and you could say things and not censor yourself.

Sullivan says today young, gay men and women use the Internet, not bars, to meet people. And the older generation has graduated from late-night bar hopping to a mellow meal out.

Of course, a lot of gay bars aren’t disappearing, they’re just becoming more mixed. Take The Abbey in West Hollywood. It’s an institution on L.A.’s gay scene. But on a weekday afternoon, there are as many straight neighborhood families as there are single gay men. Owner David Cooley says the gay-bar business model worked 10 years ago, but not anymore.

David Cooley: If you would say to me, “David, let’s open up a gay bar.” I wouldn’t be investing.

Cooley is investing in gay-friendly bars. He’s opening an Abbey in Chicago and plans to expand to other cities. He says all of the spots will be mixed — that’s where the future is.

Cooley: Once in a while, I’ll get a customer say: “The Abbey’s becoming so straight.” And my response is: “Isn’t that wonderful? Isn’t that what we’ve been working for all these years?”

Bar owners George Butler and Randall Lambright disagree. They own the Savoy Orlando and Paradise Orlando in Florida. Butler says a mixed scene might work in places like New York and San Francisco, but in most of the country, the need for gay bars still exists.

GEORGE BUTLER: I don’t think we’re quite at the point where the gay clientele is comfortable sitting in a chain restaurant or bar where they can still hold hands or kiss.

Co-owner Randall Lambright says many of the older gay bars have closed because they just don’t meet the high standards of gay customers anymore.

Randall Lambright: I can remember when gay bars were basically back-alley — dark and not very inviting. And I think the clubs that are around are definitely more upscale.

Lambright says if the quality’s there, the market for gay bars is still strong. He says the demand for exclusively gay spots hasn’t gone away, it’s just evolved.