KAI RYSSDAL: We call it a season, as in “earnings season.” Once every three months corporate America opens its books and lets us have a peek inside. It’s not always pretty in there. Exhibit A would be the financial stocks we spent some time on last week. That trend continued today, by the way, with Bank of America posting a 77 percent drop in profits, but a good number of other industries, from drugs to toys, have been doing alright. What do they have in common, you ask? Customers overseas.

ALISA ROTH: Hasbro games, like Monopoly and Candy Land, have been favorites of American kids for generations. Hasbro also owns some of the hottest new brands around, like the Transformers action figures based on last fall’s hit movie, but about half the company’s business happens overseas.

MARGARET WHITFIELD: That’s clearly one of their intents, not only to build a strong business in the key markets in Europe, but, as I said, to develop emerging areas such as South American and Asia.

Analyst Margaret Whitfield follows Hasbro. The company’s overseas revenue jumped 22 percent this quarter, while earnings at home actually dropped 18 percent. Drugmaker Merck also did well this quarter, thanks in part to its overseas business. Other companies have, too. Noel Lamb is chief investment officer for Russell Investments Group. He says it’s hard to generalize, since industries like pharmaceuticals and toys are so different, but he says one thing is true. The economy almost everywhere is growing faster than in the US, and will for awhile yet, which is good for American companies operating abroad, and right now, those companies get an added bonus.

NOEL LAMB: With the weak dollar, those companies who have a large percent of their revenues coming from overseas, are those which are likely to do better than purely domestic-focused companies.

That’s because everything that’s sold in, say, Euros, ends up being worth a lot more dollars when it’s translated back onto an American balance sheet. 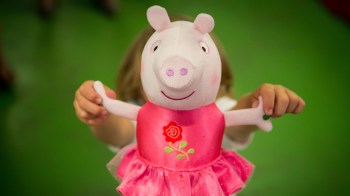