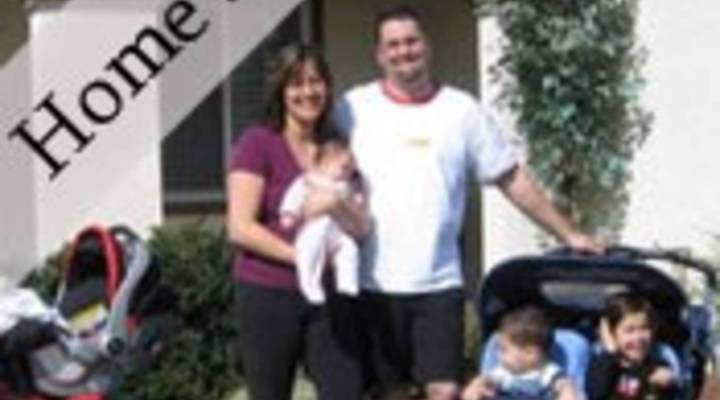 COPY
The Sinclair family in front of their home in Patterson, CA. Tess Vigeland

The Sinclair family in front of their home in Patterson, CA. Tess Vigeland
Listen Now

Tess Vigeland: Drive south from Sacramento where I met the Goslins and you’re in what’s often referred to as America’s salad bowl — mile after mile of verdant green farmland.

It’s also the epicenter of the housing mess. Stockton, California has the highest default rate in the nation.

Keep heading down I-5 and you’ll hit the town of Patterson, population 20,000. But despite its rural setting, it boasts the same kind of subdivisions you see in major metropolitan areas and as of a couple of years ago, the same kind of prices.

Vigeland: That’s Dan Sinclair. He’s a 43-year-old systems analyst who lives in Patterson with his wife Esmeralda and their three small children.

We were heading out on a walk around his neighborhood. Dan wanted to show me just how many homes were for sale or simply abandoned.

Sinclair: All right, so here’s a house you can see is in disrepair. I mean, it’s not bad, but their lawn is not mowed. That’s one of the signs is when the lawn goes dead, you know that people aren’t living there anymore.

We only had to go three houses before finding another dried-up lawn with a sign that said “bank-owned.” As we rounded a corner, the Sinclairs’ neighbors got up from their front porch and asked what we were doing.

Larry and Kathy Fiddler have lived here since the development went up four years ago.

Larry Fiddler: It’s a shadow of its former self, really. Everybody’s gone just about but five of us.

Larry says they plan to stick around. He’s confident new residents will move in as prices drop. For a while he and Kathy mowed the lawns of nearby empty houses… until there were too many.

Fiddler: Well, that one there just recently… I think they vacated it.

Vigeland: Are these foreclosure here?

We continued on to the next ghost street where the Sinclair’s house is. They’ve watched it all happen and they might be next.

Sinclair: But the prices kept going up. At one time, our house was worth over $600,000. In fact, a model just like this they were asking $699,000 — and now things have entirely collapsed.

A similar house down the street is already in foreclosure and the bank is entertaining offers for under $200,000.

The Sinclairs stopped paying their mortgage in October when the payment jumped from $3,000 a month to $4,000. Now they’re basically squatting in their own home, living there for free.

It’s happening all over the country because mortgage companies and bankruptcy courts are so backlogged, nobody’s sending the sheriff to kick people out.

The Sinclairs say they never meant for this to happen, but Esmeralda lost her job and a third child was on the way.

Sinclair: We had to start making some hard choices, which included going into foreclosure on our house and kind of starting again. We’re midway through the process, about a six to eight month process and we kind of have a plan of attack. If plan A doesn’t work, we go to B, C and D.

Plan A is asking the mortgage company to lower the principle they owe on the house, something Fed chairman Ben Bernanke has suggested to the banking industry.

Plan B: Try for a short sale.

Many of the current government proposals call for reductions in interest rates. Dan says even that wouldn’t be enough:

Sinclair: If they reduced our interest rate back to 4.25, we might be able to make the payments, but I don’t think we’re going to.

Vigeland: Now, why not?

Sinclair: We would do it if the equity was there, but in a case where we’re already so behind… Imagine that for five years, say, we’re gonna pay four grand a month and then we’re just gonna be back up at what we bought the house for. We feel like we’re throwing away money.

The Sinclairs say they want to take responsibility for their debts, but right now it makes more financial sense not to.

Sinclair: I mean, you ask a good question. Is it really the right thing to do to let the mortgage companies take up the difference? That’s a really tough ethical question.

Sinclair: We went through months of being skinflints, because we knew that we were going into the red, so we didn’t buy anything. All the sudden, we had a bank full of money and we’re living rent-free, but we know that’s not really our money.

Vigeland: How does that feel?

Esmeralda Sinclair: Great! Like he said, we were so tight with money…

Dan: It does feel great, because all the sudden, we feel like we have a little margin now where we can go out to dinner, get a babysitter…

And they say they are paying a price. They’re losing their home, most likely and their credit is shot.

Esmeralda: It’s also our dream that’s just not there anymore. Everybody dreams about owning a house, having a house and now it’s gone.

Vigeland: But not everybody would think that they should get into a 3,000 square foot house.

Esmeralda: …and that’s taught us a lesson.

Vigeland: Their next home, the Sinclairs say, will be a much smaller one. 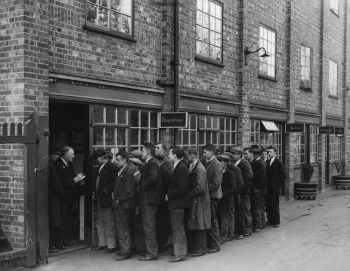