As you might expect, those figures do reflect a softening domestic economy, and imports are down, but as Marketplace’s Jeff Tyler reports, business still hasn’t gone off the rails.

JEFF TYLER: Housing woes have affected rail traffic. Shipments of lumber and wood products are down 20 percent from a year ago, and consumer worries are evident in car shipments. Motor vehicles are down 7 percent. Tom White is with the Association of American Railroads.

TOM WHITE: Ever since the dollar began to weaken, the volume of traffic has dropped off, and so far this year, we’re down about 4 percent from last year.

But while imports from Asia have tapered off, the weak dollar has boosted exports of coal and grains, and White says high fuel prices make rail transport more attractive.

WHITE: Our fuel efficiency is better than three-to-one advantage over highway. We can move a ton of freight 423 miles on a single gallon of fuel.

TOM MURRAY: The expectation in the rail industry is that this is a temporary lull.

He says companies are using this lull to invest in rail infrastructure, expecting better times around the bend. 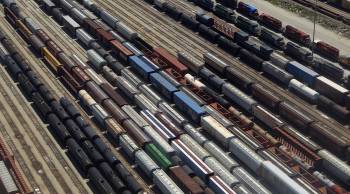 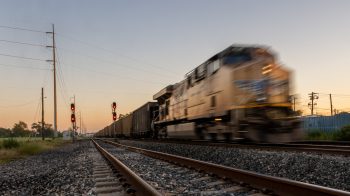