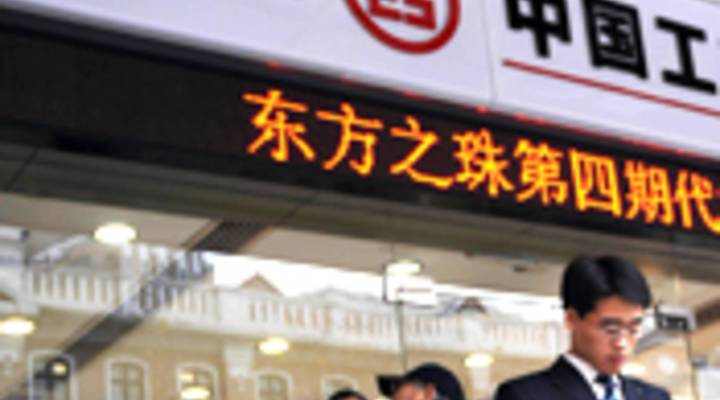 COPY
A customer leaves a branch of the Industrial and Commercial Bank of China in Shanghai, 18 January 2008. Mark Ralston/Getty Images

A customer leaves a branch of the Industrial and Commercial Bank of China in Shanghai, 18 January 2008. Mark Ralston/Getty Images
Listen Now

KAI RYSSDAL: Aloha Airlines said hello to chapter 11 again today — again, because they just got out of bankruptcy two years ago. It’s news like that that’s making corporate debt a really hard sell right now. Investors are asking why they would buy a company’s loans or bonds without knowing whether they’ll be able to back them up.

Tough as the credit market is here, it’s even trickier in China. Transparency is not all that much of a virtue there. Yet today, we learned China’s biggest bank, the Industrial and Commercial Bank of China, will be selling more than $1 billion worth of bonds, backed by Chinese corporate loans. The buyers, it hopes, will be other Chinese banks. Stacey Vanek-Smith reports.

Stacey Vanek-Smith: The market for debt in the U.S. is pretty dead. So why does the Industrial and Commercial Bank of China think Chinese banks will want to buy the debt of Chinese companies? Georgetown finance professor James Angel says China isn’t likely to face the same problems that sent the U.S. economy into a tailspin:

And the troubles in the West make it an ideal time to offer investment in China, says Donald Straszheim with Roth Capital Partners. He expects there will be strong demand for these bonds around the world.

Donald Straszheim: What better time for China to tap into the investment appetite than at a time when the American credit markets are in so much turmoil and disarray.

And Straszheim says although the ICBC is a private bank, it’s still very much a state-backed enterprise, and the government would not allow it to fail. But these are bonds backed by loans to Chinese companies, which aren’t known for being open books. And it’s hard to know if they will be able to pay back what they owe. Still, Georgetown’s Jim Angel says investing in them is not as risky as it sounds.

Angel: There are real problems with reporting and transparency in China, but they are working hard to achieve world-class standards.

Angel points out that selling these securities is new terrain for China’s banks. The ICBC sold its first asset-backed securities last year and raised about half-a-billion dollars.