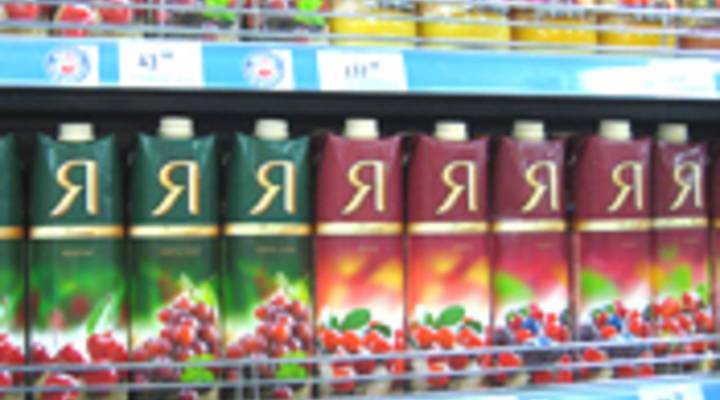 Pepsi juices up business in Russia

Pepsi juices up business in Russia

KAI RYSSDAL: TJuice isn’t the beverage most of us think about when Russia’s being discussed. There’s borscht, but that’s soup, really. Vodka, of course. But today, Pepsi made a billion-and-a-half-dollar bet on the Russian fruit juice market. Stacey Vanek-Smith reports.

Stacey Vanek-Smith: The cola wars have been raging in this country for decades.

Television ads: “Pepsi’s got that special taste…” “Have a Coke and start looking up…”

Or looking overseas — that’s where the drink wars are headed. And juice giant Lebedyansky is a huge score for Pepsi — it’s the biggest player in the $3.5 billion Russian juice market. That market is growing about 13 percent a year. Mike White is the vice chairman and international CEO of PepsiCo. He says developing countries like Russia are a huge part of how the company plans to grow.

Mike White: We have to remember that the U.S. is 5 percent of the world’s population and the U.S. business is still 65 percent of PepsiCo’s revenues. So there’s still tremendous opportunities for us outside the United States.

White says the deal is also part of Pepsi’s expansion into healthier products. And that’s crucial, says Gary Hemphill with the research firm Beverage Marketing Corporation. Hemphill says soda is still the biggest earner in the beverage industry, but it’s losing market share as consumers get more health conscious. So Pepsi and Coke have been diversifying.

Gary Hemphill: The cola wars, they still exist — but they’ve morphed. They’ve become mini-wars, if you will. There are sports-drink wars, there are juice wars, there are bottled wars… But I would say the battle between the two is probably as heated as ever.